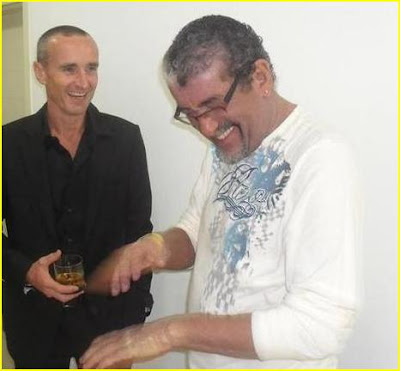 THE LAST LAUGH: Crosskill (right) with Al Barnes, Jazz & Blues 2011.
It seems we’ve come to the end of the Simon & Neville era.Broadcaster Simon Crosskill sent shockwaves through his loyal Smile Jamaica audience last Friday morning when he announced that Wednesday, May 23, would be his last day on the show as he’s leaving TV J for greener pastures. Will the a.m. magazine programme be the same without Crosskill? Highly unlikely. But the remaining co-hosts look like they can hold down the ship though the captain has bailed – and so close to the Summer Olympics at that.Meantime, don’t cry for Simon, Jamaica. He’s keeping a bright outlook. In fact, sources tell TALLAWAH that he already has his new gig lined up: spearheading SportsMax’s extensive Olympic coverage. Both Crosskill and the RJR Group’s Gary Allen have declined to comment on the real reason(s) for Crosskill’s sudden exit. But a hardly-ever-wrong inside source informs me that “finances” was a major factor in the grand scheme of things.Says a friend of Crosskill’s: “It’s TV J’s loss. Simon will be doing big things at SportsMax.”