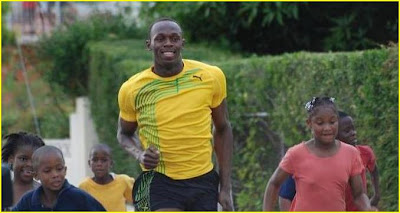 KID AT HEART: Giving back remains paramount for Bolt.
Ever ranking high on Dr. Usain Bolt’s list of priorities is a desire to help groom the nation’s future generations. To this end, the Usain Bolt Foundation is increasing its charitable contributions for Child Month 2012 and beyond. Driven by the notion that education is key, this year the foundation has secured licenses for a special Mathematics software – the only one of its kind in the region – which comprehensively covers the CXC/CSEC Mathematics syllabus designed for student success. The EPAVE Mathematics software is an E-learning tool that comprehensively covers the CXC/CSEC Maths syllabus with computer graphics, animations and audio. All lessons are presented by carefully structured narrations to guide the user through the course, which also comes equipped with hundreds of questions and answers accompanied by detailed explanations of the incorrect answers. Fresh news from Bolt’s camp reveals that the foundation recently donated over 20 of these licenses to local schools to aid in preparations for the upcoming external exams and in years to come. Later this month, playground and recreational equipment, valued at just under US$25,000, will be handed over in Portland to benefit over 1,000 children (up to age 12). The names of the beneficiary schools will be announced soon, but the donation forms part of the foundation’s mandate “to facilitate a healthy and safe environment for kids and effective use of a recreational facility.” In March, uniforms for physical education were donated to the Piedmont Basic School in Trelawny as part of the foundation’s obviously staunch mission to support children below the age of 12. Earlier this year, the UBF famously handed over US$25,000 to the Sigma Corporate Run as a part of a J$33 million fundraiser in aid of the Cardiac Surgery department of the Bustamante Hospital. Up next: the Jamaica Paralympic Association is to benefit from a donation for its preparation for the Paralympics, slated for this summer in London.