WAYNE MARSHALL: ‘Busy Signal is a great youth, not a dealer’ 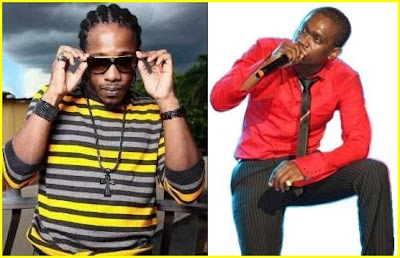 HEAVY HITTERS: Wayne Marshall (left) and Busy Signal.
The legal woes that have befallen entertainer Glendale ‘Busy Signal’ Gordon within the past week have snagged headlines across the media landscape and drawn responses from industry insiders and colleagues in the music fraternity – but with very little detail about what actually led to the deejay’s troubles.Dancehall vet Wayne Marshall recently took to his Twitter account to offer his two cents on the situation and in the process shed some light on the Busy Signal many of us might not know:“As some of you may or may not know Busy Signal is [a] good youth and artist, and not some big time drug don. Busy was caught up with friend and company as a teen in the US years ago. Instead of facing the music then he avoided them. Now it’s back to haunt him. He is a great youth, not a dealer in the crime world. My prayers go out to him. Hope he gets over this and gets back to his music as soon as possible.”Meantime, a statement attributed to Busy Signal appeared on his Facebook fan page over the weekend addressing his decision to waive his rights to an extradition hearing:“I have never admitted that I was involved in any drug deal or drug arrangement. I waived my rights to an extradition trial here in Jamaica, so that I can return to the US to face a charge of absconding bail ONLY. This incident took place ten (10) years ago before I even considered becoming an artiste.”Busy also expressed gratitude to the well-wishers who continue to stand by him in this time of difficulty. “Your messages and prayers via social networks and via members of my team are what have brought light to the darkness of my cell,” he said. “In this a time of reflection, I would like to thank my fans who have supported me through this difficult situation and who will continue to support me.”The dancehall star was arrested on a US extradition warrant last Monday after he was deported from England. According to The Sunday Gleaner, he is to appear in court in the US to answer a charge of failure to appear for a trial after a 2002 arrest on a cocaine charge.

Posted by TALLAWAH Magazine (tallawahmagazine@gmail.com) at 8:13 am