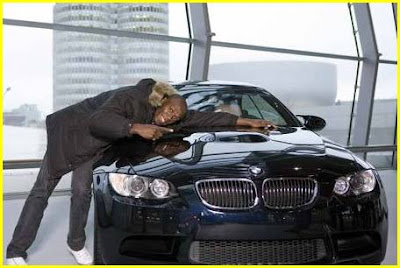 MY PRECIOUS: Bolt poses with his baby in happier times.
It was supposed to be a routine trip home from a late-night bash that ended in the wee hours of Sunday morning. But Usain Bolt’s fans would later receive distressing news that the star athlete had been involved in a “minor” fender-bender. As it turns out, the sprinter lost control of his BMW, which subsequently crashed into the guard rail in the vicinity of Half Way Tree’s transport centre, as he headed home. A breathalyzer test has since revealed that the 25-year-old Mr. Bolt was not driving under the influence of alcohol. According to DCP Glenmore Hinds if any charge is to be brought against the runner stemming from the accident, it would be traffic-related. “It would be a traffic offence, not a criminal offence,” says Hinds.Radcliffe Lewis, senior superintendent in charge of the Police Traffic Division says if Bolt is found culpable he could be charged for careless driving and failure to drive with due care and attention.The law purports that if any person drives a motor vehicle on a road without due care and attention or without reasonable consideration for other persons using the road, he shall be guilty of an offence and shall be liable on conviction to a penalty not exceeding $5,000.Meantime, Lewis says the police need to have further dialogue with the athlete in relation to the accident. “A statement was collected from Usain Bolt, but the information is sketchy and a phone number is there but we are trying to get in touch with him without success,” notes Hinds. “We need to have more dialogue with him about how the accident happened.”