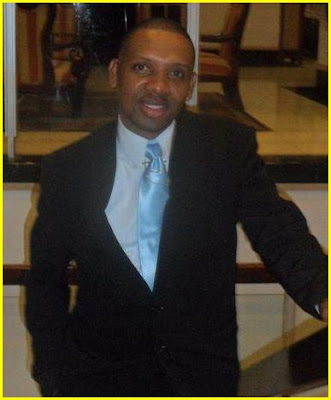 IT SUITS HIM: "I have not looked back since," says Whyte of entering theatre.
With nearly two decades’ worth of experience and an Actor Boy (and Thespy nom) under his belt, Ainsley Whyte is wowing everyone with his most gratifying stage performance to date – in Dahlia Harris’ gospel-tinged potboiler God’s Way, which returns to the Kingston stage for a limited run as of this weekend. In a new interview, the easy-going, genuinely talented 41-year-old actor (financial/investment advisor by day) talks to TALLAWAH about life off the stage, how the right attitude can take one a long way, and why religion is still the opium of the people.TALLAWAH: God’s Way offers an unflinching look at Christians and how their faith shapes their lives and how they deal with crises. How do you feel about the role religion is playing in the modern world?Whyte: I think religion is an important part of the world because it creates a balance for some people. Each person has their own religious beliefs, and some people look toward it for guidance. So I think it has an important place.Did you find that you had anything in common with your strong-willed character, Deacon?Well, the character is very outspoken. What you see is what you get, and I think more often than not I am also very outspoken. Some people might look at me and think that I’m very reserved, but once they get to know me they realize that I can be very outspoken. And I think that’s a commonality I have with the character.What initially drew you to the world of acting?I started out by becoming involved with my high-school [Dunoon Technical] drama club, and after leaving I stayed involved in drama through my church group. Then I remember going to Edna Manley in association with Exed to do voice and singing training and ended up in a drama class. Then I did an audition for Evita, and I was successful. And I got involved with the Jamaica Musical Theatre Company in 1998, and I have not looked back since, doing productions like Disco Inferno. Then I ventured into Father HoLung & Friends and then into commercial theatre with No Compromise. And then afterwards Dahlia [Harris] called me when I was doing Acts of the Apostles, saying she has a play and she wants me to take a look at it. So I then made the transition from Acts to God’s Way.That’s quite a story. So who is Ainsley Whyte off-stage?(Laughs) Whenever I’m asked that question it is usually difficult to answer because I prefer when persons ask my friends or coworkers because they can give a more precise description. But, in a nutshell, I’m down-to-earth, practical, what you see is what you get. I’m serious at times, but I love to laugh. I like when people around me are laughing and relaxed. But when the time comes for me to be serious about my work, I’m very serious.What would be your advice for youngsters fresh out of high school/college and ready to make the leap into the working world?First and foremost I’d share the advice I got from my grandmother, Your attitude is exactly what will speak to what you can achieve and how you will cope. If you have the right attitude and a willingness to learn you’ll go far. Do not initially think of the income of the revenue to be derived. Think about, How can I learn from this, how can I excel. You might be tempted to focus on the money because you have bills to pay. But if you approach it with the right attitude to learn and gain the experience and give back to society, things will fall into place.

Posted by TALLAWAH Magazine (tallawahmagazine@gmail.com) at 10:54 am