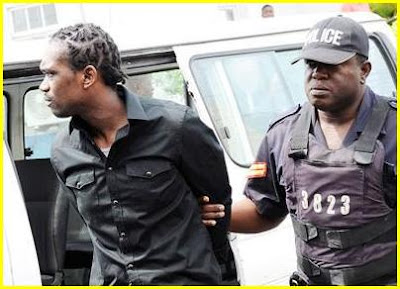 ARM OF THE LAW: The star has been implicated in a narcotics case.
The time has come for Busy Signal to, well, face the music.According to reports, a team of US marshals have arrived in the island escort the dancehall artiste back to America (on Tuesday), where he is expected to answer to charges of absconding bail in the state of Minnesota. “A private plane landed [yesterday] afternoon at the Norman Manley International Airport,” a law-enforcement officer has revealed. Last month, upon returning to the island from a European tour, the top-flight entertainer (né Glendale Gordon) was arrested at the Norman Manley International Airport by law-enforcement agents and an extradition warrant served on him. Gordon recently waived his right to challenge the extradition proceedings. As the story goes, the entertainer has been implicated in a narcotics offence and is being extradited for failing to appear before the court to answer charges in relation to the offence, which was allegedly committed sometime in 2002. Known for such hit singles as “Come Over,” “Pon Di Edge,” "One More Night" and “Nah Go Ah Jail Again,” the 36-year-old dancehall vet put out his most recent studio effort, Reggae Music Again (VP Records), in April.