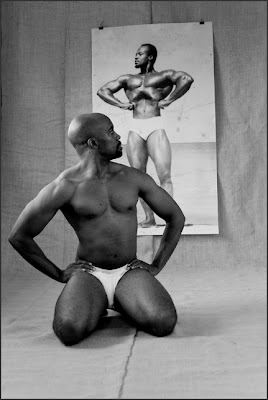 FATHER FIGURE: Lawrence's Son of a Champion 2.
Winner of last year’s Grand Jury Prize in the Super Plus Under-40 Artist of the Year Competition, O’Neil Lawrence, will unveil a new solo exhibit dubbed “Son of a Champion” at the Mutual Gallery on Tuesday, June 26.In addition to 15 new works, the exhibition is comprised of the winning photographs that landed him the prestigious prize. Lawrence’s 2011 “Self-Portraits” series, which examined his personal struggles to achieve self actualization, were primarily autobiographical. The new art show continues that personal trajectory, with Lawrence paying tribute to the complex relationship he has shared with his father and how the relationship has come to define him. “Growing up [as] the son of a competitive bodybuilder, I spent time in gyms from a very young age and as such, prevailing concepts of masculinity and the ideal male body were solidified in my mind from early on,” explains the artist, who holds a Diploma in Visual Communication from the Edna Manley College and serves as Assistant Curator at the National Gallery. “The photograph of my father, which appears in each of the works in this exhibition, was taken after he won the Mr. Jamaica competition, and [it] embodies these ideals of masculinity and male beauty,” says Lawrence. “Looking back at the photograph now, I have come to realize how this monumentalized figure of my champion bodybuilder father has influenced my work as an artist, which is focused on the male body.” In the context of Kingston On The Edge (KOTE), “Son of a Champion” is being staged in conjunction with, among other sponsors, Super Plus Food Stores, National Commercial Bank, Carreras Group and RBC Royal Bank. The public is invited to Tuesday’s opening, which starts at 7 p.m. Dr. Veerle Poupeye of the National Gallery will be the keynote speaker. The exhibition will be on view at the gallery until July 20.

Email ThisBlogThis!Share to TwitterShare to FacebookShare to Pinterest
Labels: Art News, New Exhibits, Ones To Watch