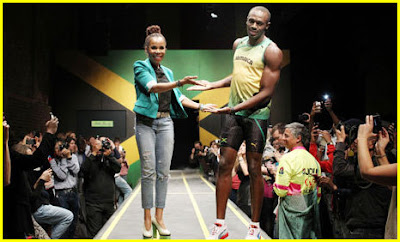 DYNAMIC DUO: Marley with Bolt at the UK preview last Friday.
“A little piece of him is going to be in London,” offers Cedella Marley, referring to her legendary father, Bob, who inspired her work on the track outfits (and accompanying costumes) that Jamaica’s contingent will be wearing when they electrify the world at the Olympic Games in London this summer.Speaking with reporters at a sneak peek in London late last week, Cedella went on to explain that the military jackets and fit of the collection, done in Jamaica’s striking national colours, had been based on her father's style and the blurring of the lines between sport and music in Jamaican culture. Marley's face, in fact, graces the shoulder of some of the track jackets. For superstar sprinter Usain Bolt (who moonlighted as a runway model at the preview), the outfits would inspire him to run faster: “[Cedella is] a great designer, but [she] also carries on the spirit of our nation through the legacy of the Marley family,” says Bolt, who only days earlier raced to a world-leading time of 9.76 secs in the 100 M at a meet in Rome. “It's going to be inspirational to run in London with that energy surrounding me.”As for the city hosting the Games this summer, Bolt describes London as a home away from home. “This is pretty much the home-court advantage for me. I'm really looking forward to competing here,” he says. “I know all the Jamaicans living here are really looking forward to it. I just want to put on a show.”