FREEING THE SPIRIT: Dreamy Beyond aims to elevate fashion to an art form 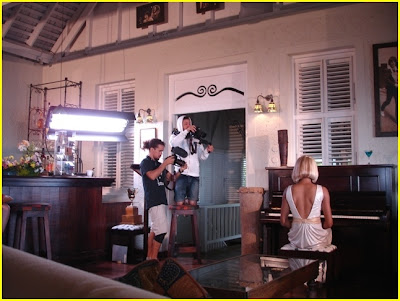 INTERIOR MOTIVES: The Saulters making a scene for Beyond.
An air of mystery permeates Beyond, the new short being widely regarded as Jamaica’s first fashion film, which had its world premiere in Kingston on Thursday. The faces of the cast (models, I am told) are at times difficult to discern as they interact with each other in a series of outdoor and interior settings. You never quite know what they are about. So scene after scene, you sort of expect the unexpected until the pieces gradually fall into place. In a way (though less perplexing), the same can be said for designer Lubica Slovak’s fantastically eclectic summer collection that inspired the project, directed by filmmaking siblings Nile and Storm Saulter, who have a real knack for mixing light and dark to stunning effect.Watching the six-minute film, there are tender moments and others that feel like they were plucked from a midsummer night’s dream. But there’s not much of story or plot or even audible dialogue. As a result, you could say it’s a bit thin on the meat. Yet what becomes most clear is that the emphasis is on the wardrobe – and the fact that the Saulters are more interested in capturing moments than telling a story. And for the purposes of the film, obviously, there’s nothing wrong with that. In the end (and in tandem with the lighthearted motif of the designer/producer’s summer collection) Beyond reveals an artfulness and an effortlessness and a free-spiritedness that is quintessentially Caribbean and in keeping with the season of fun in the sun. At best, though, it can be described as a couture-kissed meditation on beauty, nature and that timelessly enigmatic thing called style. Tyrone’s Verdict: B