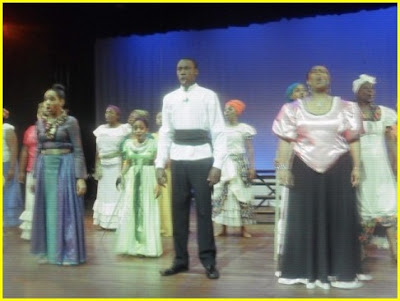 LIFT EVERY VOICE: The Singers celebrate the ancestral spirit.
Among Jamaica’s national heroes, Stony Gut’s Paul Bogle remains an iconic symbol of resilience and a permanent reminder of the power and elasticity of the human spirit. The indomitable freedom-fighter gets a glowing musical salute from the Mona-based University Singers, who’ve mounted a stirring mini-opera as part of their hugely enjoyable 2012 concert season, currently running (through June 24) at the Philip Sherlock Centre.Dubbed 1865, the production charts the events of the catastrophic yet historically significant Morant Bay Rebellion, drawing on emotionally-charged singing, lush instrumentation and a touch of athletic choreography, not to mention period-appropriate costumes, to win over viewers. Full of grit, humour, compassion and the eternal spirit of our forebears, the production is an entertaining but utterly respectful ode to history, even as it blends new music with old standards. If the original lyrics at times dip into cliché, the troupe’s convincing performance more than makes up for any shortcoming. Then there are the impressive vocal acrobatics so often required for pieces conceived by mercurial director-writer Franklin Halliburton. 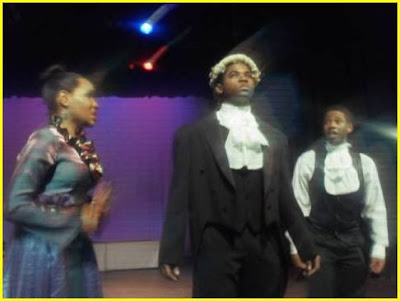 Special mention must also be made of lead performers O’Neil Jones and Oraine Thomas, two young and supertalented vocal soldiers who seem bent on proving that they’re truly deserving of their one-to-watch labels. Possessed of a captivating stage presence while delivering a series of potent solos, Jones is a riveting Bogle, using his robust baritone to profound effect.

Quite similarly, Thomas (above, centre) earns huzzahs for a highly commendable showing as the evil and crotchety Custos Rotolorum. In one particularly vital scene, as the oppressed masses (armed with stones) clash centrestage with the firearm-bearing aristocrats, Custos and Bogle square off in the midst of all the bangarang. Forming part of the opera’s climax, it’s a brilliantly executed moment.

Personally, I found 1865's overall mix of dramatic tension and big-voiced singing absolutely thrilling and full of power. Morant Bay is such a watershed moment in our cultural history and, to say the least, it’s splendidly illuminated by the Singers. It’s such a pity it’s not a full-length production. Still, in the end, its larger-than-life message of unity and equality reverberates unendingly, garnering robust and prolonged applause. It’s a performance you simply must see for yourself. Tyrone’s Verdict: B+

Posted by TALLAWAH Magazine (tallawahmagazine@gmail.com) at 1:03 am