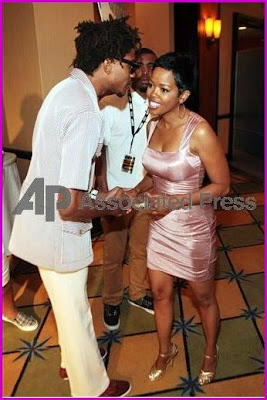 BORN TO WIN: Shepherd greets Williams at the ABFF awards ceremony at the Ritz Carlton in Miami Beach on Saturday. (Photo: Terrence Jennings/AP)
With his superb turn in Better Mus’ Come, Jamaican actor (and NoMaddz band leader) Sheldon Shepherd so greatly impressed judges and audiences at the 2012 American Black Film Festival in South Beach, Miami, over the weekend that he walked away with Best Actor, a prize that includes US$5,000 sponsored by Gold Peak Tea.Dubbed the Grand Jury Prize for Best Performance by an Actor, Shepherd shared the honour with Malinda Williams, who shone in The Undershepherd. The other nominees were Nicole Beharie, Common, Isaiah Washington and Lance Gross.Shepherd says he’s tremendously thankful for the honour. “An award like this makes you feel that the work you’ve put in over the years is finally paying off,” he tells TALLAWAH. “And whenever you can be acknowledged by your peers in the arts, and in a market as viable as the US, it’s just a fantastic feeling. From we got to the festival, it was just a loving vibe, from beginning to end.” 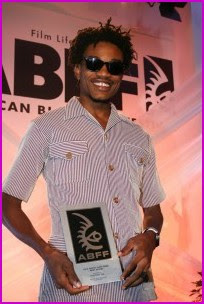 Better Mus’ Come, directed by Storm Saulter, earned nominations for Best Screenplay and Best Director. In the film, Shepherd stars as Ricky, a gang leader grappling with conscience, poverty and a ruthless political system. Director Storm Saulter says Shepherd’s win is among the latest triumphs for West Indian cinema. “This is a major moment for Caribbean film and actors in particular,” he says. “It was very much a star is born moment.”Film Life's American Black Film Festival (ABFF) is in its 16th year. Held annually, it’s an independent film festival that primarily spotlights the works of Black filmmakers.Meantime, Shepherd and his NoMaddz bandmates are currently working on a video for their Golden Jubilee project, "Sort Out Yuh Life Jamaica," which is slated to premiere later this week.