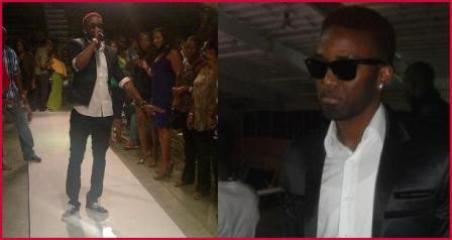 THE NATURAL: The deejay rocked the fashion crowd at CFW.
Konshens’ crazy female fans are everywhere. Even before the deejay (sharply dressed in black Romeichwear) appeared on the runway to close Friday night’s leg of Caribbean Fashion Week with a slew of his hottest singles, the deafening screams threatened to rip the roof off the National Indoor Sports Centre. And when he finally touched the ‘stage’, singing the first few lines of “Bad Gal,” they swarmed him like bees to honey. TALLAWAH caught up with the flame-haired star prior to the pandemonium:TALLAWAH: Tell me about the deal you recently inked with VP Records to promote your massive hit “Gal A Bubble.”Konshens: Well, the song has been doing extremely well in the Caribbean and it picked up steam in New York as well, and you know that VP is based in New York. They became aware of the impact the song has been having so they signed it exclusively to put it on their Reggae Gold compilation, and they’re servicing it now to New York radio stations and wider American radio.Your most recent mixtape, Street Code, appeared out of nowhere last week.We just ah keep the music moving. I don’t stop singing none at all, so I can’t hold the music. We don’t know how long we’re gonna be able to sing, so as long we ah sing, songs are gonna be out.You released it without any fanfare, almost as if you’re going for a low-key kind of vibe this time around.Well, it just drop, and that is the street version. Today, I just finished the gal dem version for the summer, and that will drop tomorrow. It’s just a barrage of music. People can tek weh dem like, and what dem nuh like them just push it one side.Seeing that this is CFW, the premier fashion event in the region, who are the global fashion/style icons that you admire?You know, I really don’t have a style icon. But I have a favourite designer: Romeich. And it’s not the regular kind of things Romeich mek for me either. It’s more like a merger of the ideas that we come up with.Career-wise, what plans do you have for the summer?Just to be in Jamaica. You done know seh we’re gonna have a whole heap of shows outside of Jamaica, but mi ah try focus pon Sumfest and ATI and dem nice tings deh weh ah gwaan fi Jamaica.