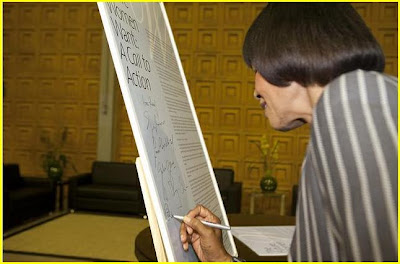 SIGN OF THE TIMES: Simpson-Miller adds her name to the "Call to Action: The Future Women Want" at the Women Leaders' Summit in Rio de Janeiro.
“Our gender predisposes us to a sensitivity to the realities that are unique to women. We will have failed as leaders if, at the end of this Summit, they are perceived as such.” Those words coming from Jamaica’s Portia Simpson-Miller in her no-holds-barred address last Thursday to the Women Leaders Summit in Rio de Janeiro, Brazil. The event was organised as part of the UN Summit on Sustainable Development (Rio+20).The Jamaican Prime Minister urged her fellow leading ladies to staunchly represent the voiceless women of the world who bear the brunt of care giving – and “insist that pragmatic considerations are included in the deliberations on sustainability strategies.” PM Simpson-Miller further noted that an essential link exists between sustainable development and many of the challenges (including poverty eradication) that the countries of the world face. To this end, she went on to propose a “rights-based approach” to shaping global policy, saying that it must pay specific attention to the marginalized and the most vulnerable in society, and must include sensitive human rights issues which affect the reproductive rights of women as mothers and potential child-bearers, as well as partners. 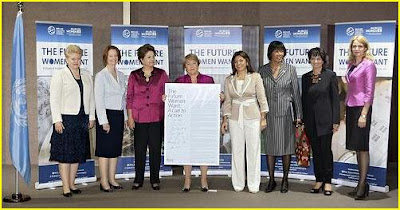