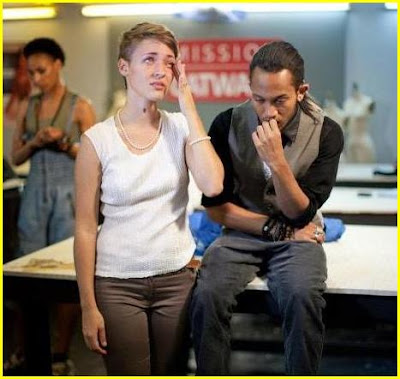 SAD REALITY: Stirm (with Chan) wipes away tears backstage. (Photo: Tiffany Lue-Yen).
Is it a case of failing to deliver when it matters most?Rebecca Stirm, the 18-year-old bird of Belize who dazzled viewers and judges with her style wizardry this season on Mission Catwalk has been eliminated from the regional competition. Last Tuesday night on the fashion reality series, the Top 5 contestants were charged by showrunner/hostess Keneea Linton-George with the task of designing a handful of pieces for a London 2012-themed mini-collection. By the end of the night, Stirm’s pieces, though neither flat nor inappropriate, failed to inspire the judges as she’d managed to do on so many previous occasions.As a result, Stirm – who was at one point considered the runaway favourite for the crown this season – saw her hopes for a place in the Top-3 final showdown crushed. She wiped away tears as she exited the catwalk for the final time. Barbados’ Kerin Scott was also sent home Tuesday night. 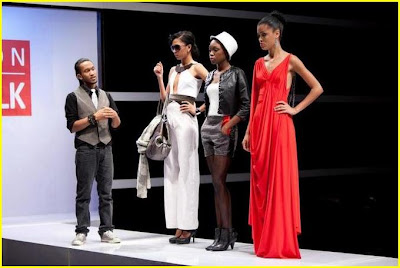 On the other hand, Trini bad-boy designer Ryan Chan came out on top for a second-straight week. His mini-collection found great favour with the judges and will be available at the Hope Road-based SoHo boutique in Kingston as of this weekend.Meantime, in addition to Chan, this year’s Mission Catwalk Top 3 finalists include the Jamaican duo of Gregory Williams and Crystal Powell. The trio will square off for top honours this Friday night at Caribbean Fashion Week. See you there!


Posted by TALLAWAH Magazine (tallawahmagazine@gmail.com) at 12:50 am