ON THE RECORD: Popcaan clears the air on Vybz Kartel – and plans for upcoming album 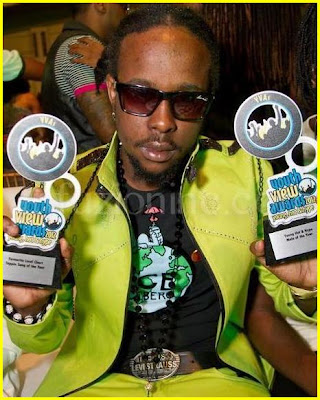 DOUBLE ACT: The star at the 2012 Youth View Awards in Kingston.
With countless pesky rumours swirling in the blogosphere and on the mean streets of the city, dancehall hotshot (and Reggae Sumfest performer) Popcaan, understandably, wants to set the record straight once and for all – but especially on the status of his relationship with incarcerated mentor Vybz Kartel.“Since his incarceration I have not visited Vybz Kartel,” the award-winning deejay admits in a new release. “In September 2011, it was explained to us that only family members were allowed to visit at set times once a week. On several occasions when I enquired about visitations I was told that this was not advised. Later Vybz Kartel communicated through letters that I should focus on my career and stay away from the police. All our communication has been focused on updates on my career, my song releases and stage shows and general discussions as one would express in the present situation. Up until May 2012, when the Portmore Empire was dissolved, we maintained a business relationship.”Reflecting on time was, Popcaan (born Andre Sutherland) says he’s forever grateful to Kartel and the now disbanded Portmore Empire for the opportunities afforded him, including appearing on such star-making collabos as “Clarks” and “Never Fear Dem.” “I am grateful and am loyal to Vybz Kartel for the opportunity of working with the Portmore Empire, for everything I learned from him about the music business, life, friendship and family. He is a brother, a father figure, mi real chargie. He has influenced and will continue to influence my career as one of my favourite artistes.”Meantime, despite Vybz Kartel’s uncertain future, Popcaan remains hopeful about collaborating again with his mentor. “I look forward to working again with Vybz Kartel,” he explains, “and will be checking with producers to see what previously recorded material they may have that I can include on my album, which I will start working on soon.”This past February, Popcaan walked away with three Youth View Awards, including the trophy for Young, Hot & Hype Male Artiste of the Year. The 23-year-old star is also among the reggae and dancehall acts confirmed to hit the stage on Dancehall Night at next month’s Sumfest in MoBay.