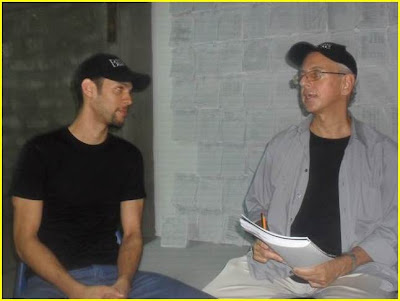 ALL IN THE DETAILS: King and Issa go over the new script.
Surely there can’t be anywhere more unglamorous than this nondescript warehouse towards the back of the Sagicor Industrial Complex, off South Camp Road in Kingston. That is until you set foot inside the building on a balmy Thursday evening and realize that its occupants are busy making fabulous art. Welcome to the rehearsal and set-construction space of EightSevenSix, the theatre production outfit that put on last year’s award-winning musical opus, Last Call.These days, building on the incredible momentum from last season, the company’s principals and technical team, are gearing up to astonish local theatergoers anew with Mr. & Mrs. Blacke, a dialogue-heavy marriage drama, which is a month away from opening at Mona’s Philip Sherlock Centre.As TALLAWAH soon discovers, putting on a show with a difference is the EightSevenSix way. And, taking a page from the Broadway manual on how to succeed in show business, it all starts with securing a proper and dedicated working space that, in its own way, is conducive to the creation of theatrical magic. “The idea is that from the ground up, we approach putting on a show very differently. We try and approach it in a very professional and very comprehensive and First-World way,” explains the show’s writer (and male lead) Keiran King. “So we get a dedicated space. We recreate the theatre inside that space and we build everything, as I said, from the ground up.”A quick glance around the expansive room reveals aspects of the set under construction, as well as work tables, desks, a few chairs and props that will find their way into the final product come July. “We’ve been here at Sagicor since the middle of May and will be here until four or five days before opening [night]. We’ll just move everything wholesale like the week before,” says King. “And the idea is that the construction crew can come and see exactly what they need to do because everything is here to scale. Things are marked out on the floor. The set designers can build unimpeded by any distractions. So they work in the day. We come in and rehearse at night.” 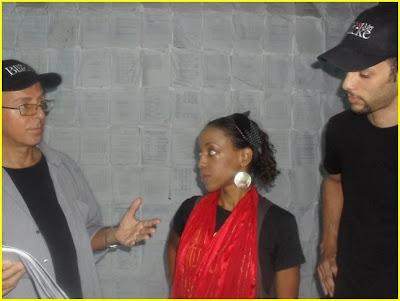 And rehearse they do. Just ask Keisha Patterson, the leading lady, who along with King makes up the cast. “These rehearsals have me on an emotional rollercoaster. It’s really in-depth,” she admits, curled kitten-like on a sofa. “This character has a lot of layers to her, and we’re into everyday rehearsals. So it takes a lot out of you.”But she’s not complaining. Being a natural performer from day one, Patterson is used to the hard work that comes with the territory. “I grew up in the theatre; I started as a pre-teen in theatre, so this is really my life. I’m used to this,” she explains, adding that her attention to detail has also come in handy. “I’m definitely a perfectionist. I sleep with my script. I wake up with it. I need to get the emotion right. It has to be true, and once that happens then the character is really living. And the director, Paul Issa, really gets in-depth, so it’s awesome.”For Issa, helming the project was simply an opportunity too good to pass up – especially in the wake of Last Call’s tremendous success, including an Actor Boy win for Best Production. “I’m very glad that they asked me to direct it. I was quite impressed with many aspects of Keiran’s last production, and he told me he’s written this play and he sent it to me and asked if I’d direct it, and I said yes,” explains Issa (Tartuffe). “It’s a very well-written play, I think. It’s a very unusual work,” the director continues. “It deals with a different kind of socio-economic bracket from what most Jamaican plays deal with. But I like the way it was written, and I like the professionalism of the crew, how they go about doing everything. And I am delighted to be working with such a talented cast. It’s just great.”