SCREEN GEM: Usain Bolt and Sista P to be interviewed for OnePeople docu-film 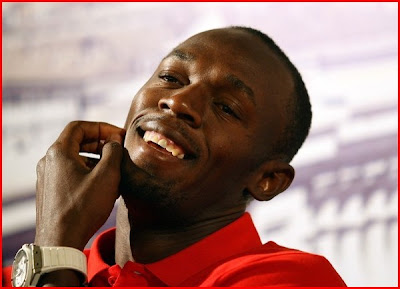 ROMAN HOLIDAY: Bolt at an event in Italy, May 2012.
Viewers of a sneak preview of the OnePeople documentary recently at UWI Mona would have noticed a major omission or two among the iconic Jamaicans featured – record-breaking Olympian Usain Bolt included.But as TALLAWAH has been informed, the World’s Fastest Man has not been overlooked and will certainly be included in the eagerly anticipated film before it is officially released in time for Independence. “We haven’t had a chance to interview him yet,” film producer Justine Henzell tells me over the phone. “We’re doing some last-minute interviews, and the two we have left to do are the Prime Minister and Usain.” Evidently, it’s a case of saving the best for last.OnePeople (1962 Productions), dubbed the definitive Jamaica 50 film project, will include interviews with dozens of Jamaican-bred luminaries (at home and abroad), including the likes of former US Secretary of State Colin Powell, Essence Magazine’s Constance White and sensational sprinter Yohan Blake. Premieres are scheduled for August 6 in Kingston and New York and London other international cities around the world.>>STORY: Culture lovers support OnePeople preview