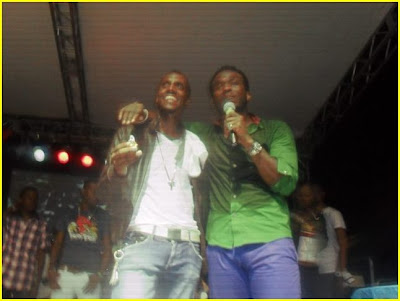 CROWD PLEASERS: Prodigal and Omari greet the Freedom Fest massive.
What primarily continues to distinguish the world’s best live performers is that mix of powerful stage presence and bold stagecraft. Prodigal Son has it. On Saturday night at Freedom Fest inside Kingston’s Ranny Williams Entertainment Centre, the dancehall gospel veteran and birthday boy was in his spellbinding element, performing successive fan favourites (“Blessings Ah Run Mi Down”, “Lava Ground”, “Head Caan Hot Suh”) and cuts from his new album, 7699, that had the massive throng in a rag-waving, foot-stomping frenzy. The atmosphere was electric, and only intensified as the clock drew ever closer to striking midnight.New sensation Sean Lypher brought an energetic, hip-hop-spiked flavour to their sizzling collabo “Up, Up and Away” while a female back-up vocalist gave a goosebump-inducing treatment of “Ketch Ah Fire.” All around, there was no shortage of vigour and sweat, spectacle and sheer vocal power, as Prodigal and his cohorts (not to mention that competent band of musicians) ministered to the mega-sized crowd with soul-stirring music and empowering messages. And this seems the perfect time to mention the TALLAWAH cover star’s eye-popping outfit: green long-sleeved shirt, purple pants and black footwear. A totally unexpected combination, but it worked, while giving his set that fashionable and edgy touch he customarily brings to the stage.The event came to a close following a brief birthday celebration, complete with a custom-designed cake and on-stage appearances from Prodigal’s industry brethren and his two kids armed with hearty b’day wishes for their superdad. 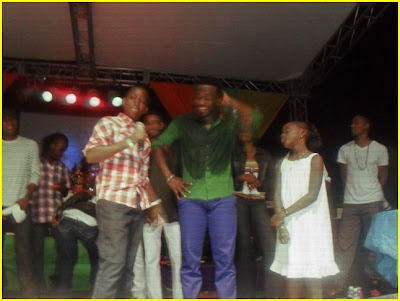 THE KIDS ARE ALL RIGHT: The star is surprised onstage by his children.