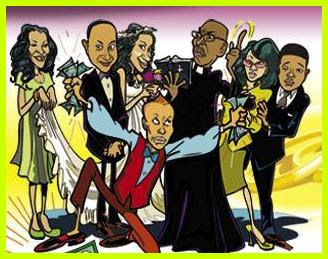 MAKING A SCENE: Deceit and desire collide in Di Weddin' Scamma.
Playwright Michael Denton is one of those scribes who believe in letting the right inspiration find you. “I don’t like to pick subject matters to write about,” he tells TALLAWAH. “It’s not like I get up and say I’m going to write about this or that topic today. I just let the ideas come to me and it works well for me that way.” Denton applied that same surefire formula when working on the script for his latest comedy, Di Weddin’ Scamma, which is being put on this month by Stages Productions with a cast led by Maxwell Grant and Keith ‘Shebada’ Ramsey.And though readers might be tempted to fixate on the idea of marriage as the title suggests, he confesses that the story revolves more around the subversive element of the title. “To be honest with you, the show is really about the con artist (played by Ramsey),” says the New York-based writer, whose previous stage credits include the hilarious Ghett’Out. “The marriage becomes a part of the story. I like when my stories have a degree of comedy to them because nobody really wants to watch a straight drama. Somebody going to the theatre wants to laugh, and they want to listen to a good story.”By his own admission, Denton (whose name is also associated with the Island Theatre outfit) has been penning scripts since he was a 13-year-old enrolled at York Castle High – before going on to work alongside theatre legend Ralph Holness, among others. What’s been his greatest challenge as a playwright?, I ask him. “I can’t put my finger on a single challenge except for maybe writer’s block, which every single writer goes through,” he tells me. “There are times when you are before the keyboard and the ideas are just not flowing. Every true writer gets writer’s block. But writing is not really a difficult thing. It’s a part of life. And once the ideas come, I start writing.”