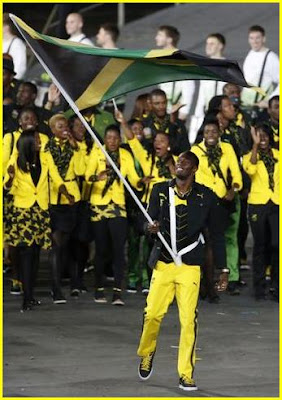 FLYING HIGH: Team Jamaica brightens up the Olympic Stadium.
The Games of the 30th Olympiad got off to a dazzling start in London on the weekend with an exuberantly orchestrated Opening Ceremony (artistically directed by Oscar-winning filmmaker Danny Boyle), marked by bombast, a sense of pageantry and no shortage of thrills and hyperbole, watched by a global audience of billions.
But the bonafide highlight of the evening, of course, was the much-anticipated Parade of Nations, as the ‘ambassadors’ of the more than 200 participating countries (customarily led by Greece) made their way into the venue. Sprint superstar Usain Bolt was beside himself with glee – and pride – as he hoisted the Jamaican flag, with his beaming compatriots not too far behind. PM Portia Simpson-Miller and our woman in the UK, Aloun Assamba, were on hand to witness the spectacle, a most unforgettable Jamaica 50 moment.For the 25-year-old Bolt, getting to serve as Jamaica’s flag-bearer (and on such a momentous occasion) is the stuff dreams are made of. A couple of hours later he tweeted: “Such a joy and honour to carry the Flag..let the games begin..To the world me say.”

As for the rest of the proceedings, the Brits (claiming home turf) figured prominently in the proceedings. HRH Queen Elizabeth II shared a cool entrance with an escort no less than today’s Agent 007, Daniel Craig. Soccer star David Beckham delivered the Olympic torch into the Stadium via speedboat. Rowan ‘Mr. Bean’ Atkinson made a comically delightful cameo during a reimagining of that iconic jogging scene from Chariots of Fire. 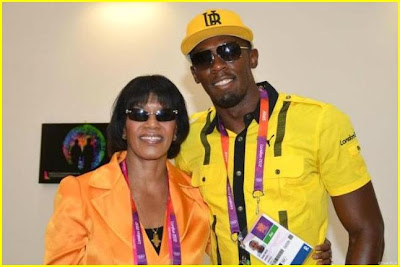