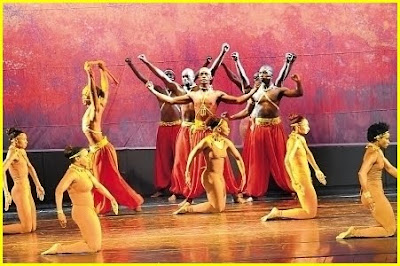 ANCIEN RÈGIME: Dancers in a scene from The Crossing.
The 2012 Season of Dance of the National Dance Theatre Company is an excellent example of how to make the vintage and the utterly modern co-exist in harmony. Equal parts dazzling and daring, celebratory and reflective, the presentation finds the venerable company moving into a new chapter (another half-a-century, no less) firmly touting – and achieving – its mission of continuity and renewal. In essence, living up to the Nettleford ideal.This past Friday when I went to take in the show at the Little Theatre, the programme offered seven works, a hugely enjoyable mix of revived classics and fresh mountings, opening with Nettleford’s The Crossing, an impassioned and painful work that comes off as a paean to oppression, struggle and redemption. Making ample use of Negro spirituals and references to slavery and colonialism, it features controlled, graceful movements, including some lovely solo work by that lithe creature Kerry-Ann Henry, who never fails to dazzle with beauty and precision.I equally enjoyed the work’s sequencing and contrast of moods (joyous one moment, lugubrious the next), but in the end, The Crossing transcends all that, ultimately offering a display of how to fashion pure art out of suffering and adversity. 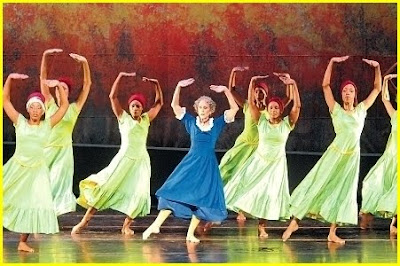 Stage legend Melanie Graham was a welcome leading presence in Bert Rose’s Edna M, a moving and poignant story centred on art and memory, and featuring choreography as delicate as the woman herself. Showing us that age ain’t on her page, Graham kept pace wonderfully with the new-gen performers, particularly a quartet of sinewy male dancers portraying semi-nude sculptures. Truly provocative stuff. But that’s precisely the thing with the NDTC – especially creative masterminds like Rose and Nettleford and Clive Thompson – it’s about rising above the confines of convention and pushing the boundaries of artistic creativity.And speaking of Thompson, I found his Ode a thoroughly fresh, freewheelin’ and fun ball of spunk and energy (with a contemporary flair), which lent a change of pace and mood to the evening’s proceedings. Among the highlights: Marley tunes given a groovy jazz-funk treatment, a frisky-flirty Marisa Benain, Henry again in all her agile glory, not to mention some subtle erotic undertones.The crowd-pleasing Siempre Corriendo by Ramon Alayo is a study in power and athleticism, with a four taut males (locals Marlon Simms/Mark Phinn and Cuban invitees Delvis Savigne Friñon/Edsinol Gonzalez) moving in near-perfect sync to a menacing operatic soundtrack. Eduardo Rivero’s Sulkari, meantime, is a haunting tribal-esque affair marked by stunning imagery in spite of the dim lighting and gorgeous costumes, while Barbara McDaniel’s lukewarm Valhala features a solo male clad only in passion-red pants and a riot of fierce curls atop his head.It virtually goes without saying that any special NDTC performance must conclude with Nettleford’s visceral masterpiece, Gerrehbenta, the most joyous work of the company’s vast repertoire. Spectacular with its kaleidoscope of vivid hues and inspired early-Jamaican movements, it’s a slice of genuine terpsichorean splendour. I’ve seen it performed year after year, and each time it feels, quite incredibly, like a new experience.

This year, that warm sensation extends to the company’s entire 50th anniversary season, an involving and compelling mélange of the new and the old, reminding viewers of the power and sheer magical joy that is excellent dance theatre. Tyrone’s Verdict: A-