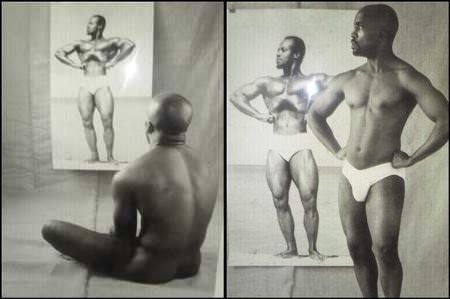 PORTRAIT OF THE ARTIST: Highlights from "Son of A Champion."
On Tuesday afternoon I finally made the trip up to the Mutual Gallery to check out O’Neil Lawrence’s new one-man exhibition, “Son of a Champion.” But, as it turns out, two men are the stars of this amazing art show, which is full of power, soul and Black beauty. You simply must see it for yourself.Comprising sixteen pieces and a video installation, the autobiographical exhibit comprises photographs (captured in stark black-and-white) depicting an underwear-clad Lawrence admiring, sometimes imitating, a vintage photo of his brawny bodybuilder father.It’s admiration and imitation to the point of worship. And these images of muscled bodies truly pull in the viewer. Perhaps most evident of all, Lawrence (winner of the 2011 Grand Jury Prize in the Super Plus Under-40 Artist of the Year competition) possesses the soul of a rebel poet and a deft eye.In this the age of sculpted athletic demigods like Powell, Blake and Bolt, “Son of a Champion” arrives as a glowing salute to the taut male physique and what Lawrence calls “male beauty” – even as it pays soulful homage to the senior Lawrence and illuminates the father-son relationship, a theme not readily explored in modern Jamaican art.“Son of a Champion” is on view at the Mutual Gallery, 1a Oxford Road, until July 20.