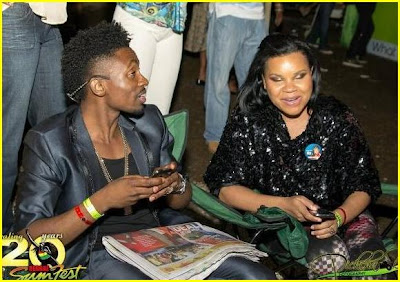 STARRY NIGHT: The musical duo clearly enjoy each other's company.
The night air was a tad chilly, but the super-hot performances that ignited Catherine Hall at Reggae Sumfest on Saturday kept concertgoers reasonably warm – mom-to-be Ce’Cile Charlton included, who made the trip from Kingston, in all her maternal glory, to catch performances from the likes of R. Kelly, Protoje and beau Chris Martin. The lovebirds are anticipating the birth of their first child together – a daughter – later this year.Following his crowd-pleasing gig (that included all the big hits like “Cheater's Prayer” and “Paper Lovin”) and press-room interviews, Martin made his way into the audience’s VIP section to keep Ce’Cile’s company. “They were giggling and having a great time,” an eyewitness tells TALLAWAH. “They looked very much in love.”Now, the million-dollar question on everybody’s lips: What will they name the baby? I hear that Ce’Cile has opted for Shaniqua, but you can’t believe everything you hear, can you? All in favour of Gretel or Cynthia raise your hands! Stay tuned… 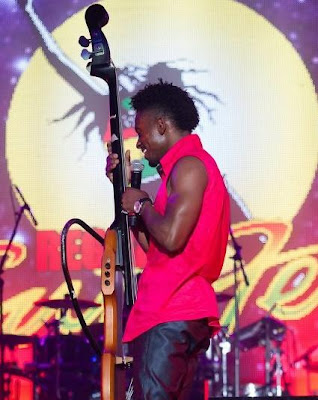 ON THE JOB: Chris being instrumental on stage at Sumfest last Saturday.