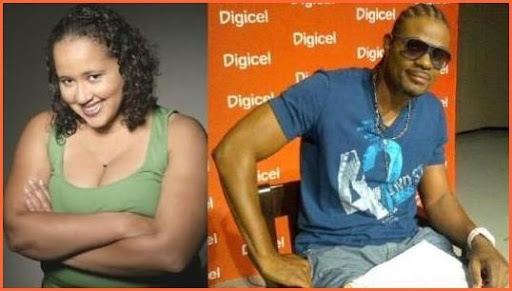 POWER OF TWO: Schroeter (left) and D-Major.
“The format for Digicel Rising Stars has come to its natural end,” says series producer Sharon Schroeter. “It’s a brand-new show.”As such, the hordes of viewers who tuned in to last Sunday’s debut episode of Digicel Stars would have noticed that only one familiar face – hostess Terri-Karelle Griffith-Reid – is back from the previous incarnation of the televised talent series.This year, stardom hopefuls were invited to audition via telephone in any of the four genres (pop, soul-R&B, gospel, Jamaican sound) that are open to contestants. “We got over 23,000 persons auditioning over the phone. So the response has been good,” notes Schroeter. “And even though there are genres, there will be one overall winner. So the coaches and the mentors have a big part to play.”Those mentors, charged with offering tips and guidance to the contestants, are Carlene Davis (gospel), Conroy Wilson (pop), D-Major (soul-R&B) and Derrick Coffie (Jamaican sounds). How were they selected? “We did our research. We looked for persons who have different talents, so not only singing but also some background in the music industry,” explains Schroeter. “You have to know music on a whole so you can coach people and help them with their vocals and performance techniques. So we looked at all the different avenues. We had a list of people in mind, but a lot of it was based on availability.”Word on the street is, Damian 'D-Major' Codlin was a supremely surprising choice for a mentor. Schroeter is a tad surprised by this. “D-Major has been around for a very long time,” she tells TALLAWAH. “He started out in a successful group before, and then they broke up. Plus, he is a great singer.”Digicel Stars will air new episodes each Sunday night on TV J until the September finale.