QUEEN OF THE NIGHT: Tessanne Chin 'brucks it dung' at Tracks & Records 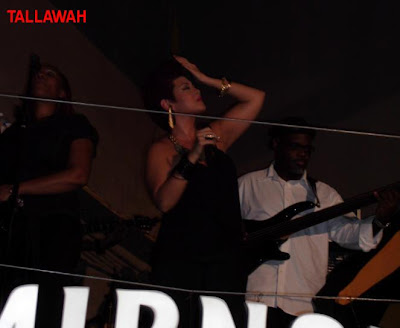 CROWD PLEASERS: Tessanne, with members of her band.
It’s a pleasure always to see and hear the singer Tessanne Chin under the bright lights, doing what she does best: belting out some tunes live. During her terrific one-woman show at Usain Bolt’s Tracks & Records on Tuesday night (part of the Behind The Screen series), the powerhouse songstress was in fine form, looking and sounding like a woman in a great and happy place in her life – and secure enough to share the joy with her fans.

At about 10:48 pm, the screen went up and the lady appeared, nicely turned out in a femme-fatale all-black look, and ready to thrill the standing-room-only audience. And we were in for quite a treat. By turns soulful and searching, upbeat and energetic, Tessanne’s show offered a vivid demonstration of how an acoustic set can dually stir emotions and electrify. 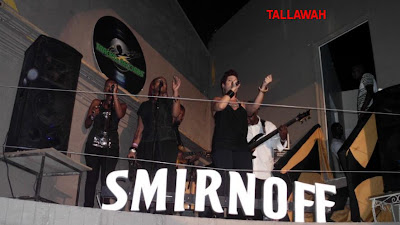 Whether performing her new and old standout originals (vibrant “Messenger;” the skalicious “Strings of Love”; show-closer “Hideaway”) or interpreting some of her favourite cuts by other artistes (Hoobastank’s “The Reason”; Rihanna’s “We Found Love” and “Where Have You Been?”), the songbird’s vocal range and stage presence are consistently a study in superb artistry.

Yet my personal favourite moments arrived with the show’s more unexpected touches – including that utterly committed attempt at Mr. Vegas’ “Bruck It Dung”; a very nice treatment of Sean Paul’s “S/he Doesn’t Mind,” the sweet Tami Chynn duet "You & Me" and, finally, a wonderful take on the Damian Marley smash hit “Affairs of the Heart,” which Tessanne dedicated to hubby Michael Cuffe. Citing Damian’s penchant for memorable melodies and profound lyricism, Tessanne identified him as one of her dream collaborators. It wouldn’t come as a surprise that he feels the same way.