A DAY AT THE FAIR: Postcard from the 2012 Gungo Walk Festival 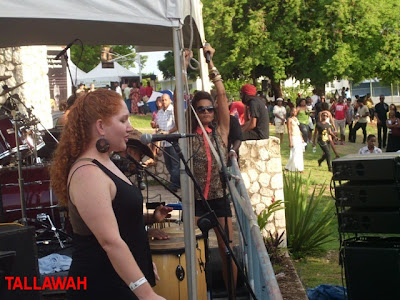 SHE'S WITH THE BAND: Singer Sez-I (centre) works it out on stage.
Poised to earn its calendar slot as one of the must-do cultural events in the city, the Gungo Walk World-Alternative Music & Arts Festival drew a sizeable crowd of live-music aficionados and art-world enthusiasts to the grounds of the Edna Manley College on Saturday for its inaugural staging.

By the time I arrived at the venue at a little past noon, the place was already teeming with people, some checking out the booths and stalls in the vicinity of the basketball court while others gathered by the Stone Bridge Stage grooving to the rootsy strains of the Earthcry band. (Random Chaos, Jakoostik and Acmatic were among the other groups scheduled to perform.)

After a hot dog, I took a quick browse of the displays, which boasted everything from herbal supplements and vivid artworks to tee-shirts and hand-crafted jewellery. It was then time to visit the After Dark Theatre (adjacent to the Dennis Scott Theatre) where they were screening a mixed bag of short films, leading up to the main feature: the wonderful OnePeople documentary. The big-screen treatment truly enhanced my appreciation of this insightful, all-star docu-film. 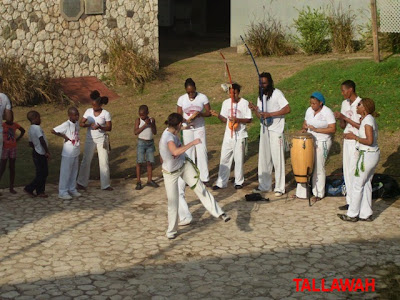 Back outside, some ninety minutes later, there were signs of a light drizzle, but the sun had since resumed its position overhead. The Blu Grass in the Sky band was onstage, serving up a raucous number before a swelling and captive audience. The likes of petite singer-songwriter Sez I (singing a tidy mix of covers and quirky originals) graced the stage next.

On account of the rain, a number of the activities had to be pushed back a couple hours, including the enormously satisfying theatrical offering “2 The Hard Way” (with artistic troupes Tableaux and Quilt) inside the Dennis Scott Theatre. Tessanne Chin, Randy McLaren and others were later scheduled to perform at a concert to bring the curtains down on the festival.

Overall, the day-long Gungo Walk fest can best be described as an eclectic, lively affair – in spite of the delays and other minor shortcomings. Throughout the day, I managed to spot a few (famous) faces in the crowd soaking up the positive vibrations – including the likes of Kerry-Ann Henry, Paula-Ann Porter-Jones, Brian Heap and Protoje. 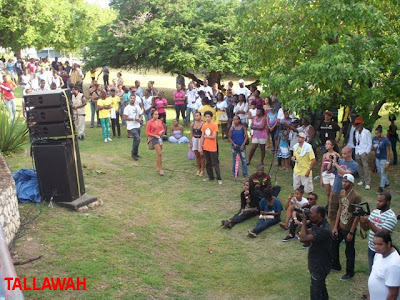