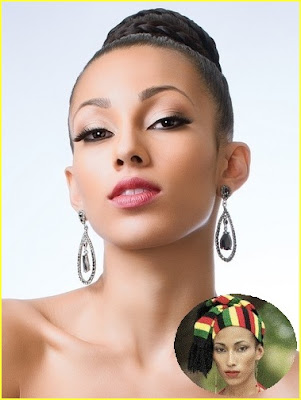 GLOW GIRL: Zaky in all her regal glory.
One imagines that prepping to take on the rest of the world at the Miss Universe pageant is fraught with obligations that can rattle even the most fearless of beauties.

For Jamaica’s 2012 representative Chantal Zaky, who days are marked by strict adherence to a fitness and image-nurturing regimen in the run-up to the December coronation, the trick is to have everything in its place while paying heed to proper time management. “Things are going good right now,” she admits. “I’m just trying to ensure that I have everything taken care of.”

As she explains, “everything” includes, among other necessities, wardrobe and sponsorship and mental toughness. “Oh, that is absolutely crucial,” Zaky says of getting mental prepared, “because you’ll be tested in that way a whole lot.”

One of the first things people notice about the 24-year-old, who cuts an imposing figure in heels, is her stunning gamine appearance (that luminous skin! those cheekbones!) that draws comparisons, in my mind, to the likes of former supermodel Nicole Murphy.

To keep that va-va-voom body in head-turning shape, Zaky tells me that hitting the gym at the Wyndham has become a priority. “I’ve been doing my yoga exercises and Zuma pretty much on my own,” she confesses. “I’m here in Kingston most of the time, but I’ll sneak off to Portland every chance I get.”

And what’s the secret behind her golden glow? “I’m very holistic. I think that’s the way to go.” To maintain her to-die-for luminosity, she swears by two things. “I use aloe for my face. I live by that. And I love, love, love shea butter, which I use religiously.” Chocolate, she says, is public enemy number one.

Being a full-time aunt to two spunky kids also keeps her active and on her toes. “I’m a very hands-on aunt, so I really push them to be confident,” she says of her nephew and niece, who she has both enrolled in karate and dance classes. Starting a family of her own someday is never far from her thoughts. “I want to have about four or five kids,” she tells me, laughing. “I want a really big family.”