CALLING THE SHOTS: Nile Saulter on his newest efforts and the state of C’bean filmmaking 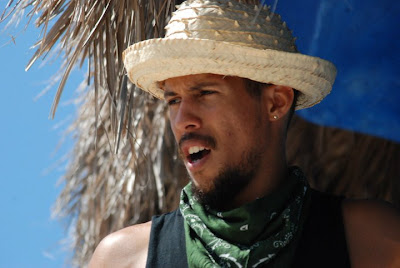 ON THE COAST: The director on-set in Negril.
“In the modern era, I think it is more important than ever to tell stories. I think it is essential,” explains Jamaican filmmaker Nile Saulter, as he sheds light on his pair of short films – Coast and The Young Sea – which form part of the new series Ring Di Alarm! produced by New Caribbean Cinema. “I think it is good to show all aspects of such a diverse place like Jamaica, and that’s really my number one aim.”

Shot in beautiful, sun-kissed Negril, Saulter’s Coast is a morality tale that chronicles the experiences of a young woman who encounters a situation that forces her to test her own sense of doing the right thing. The Young Sea, on the other hand, assembles leftover footage from a music video Saulter filmed sometime ago out in Bull Bay. “I like the profession of filmmaking,” says Saulter, who was speaking during a recent Sunglass Session. “I think it is challenging physically, emotionally and mentally, and I like how balanced it is in that way and how it impacts people and how it makes them feel.”

In addition to Saulter and his sibling Storm, Ring Di Alarm! features the work of four emerging filmmaking talents, including Joel Burke and Kyle Chin, and is slated for a London premiere this week. “There is definitely some growth happening in Caribbean cinema now, and this is a good thing,” says Saulter, who has helmed music videos for the likes of the Blu Grass in the Sky band. “For [New Caribbean Cinema], it’s community filmmaking; everybody helps each other out so we get our stories out and flex our muscles in that way.”

Looking ahead, the director remains optimistic that Jamaica and the rest of the region will continue to churn out quality pictures that dazzle on the world stage and stand the test of time. “With the energy we have here – we are dominating so many areas – I feel that film is coming right along on the wave,” he says. “And I feel really good about it and that we’ve completed this series, and it’s ready for the world.”