A HOLLYWOOD CONTROVERSY: Is Zoë Saldaña a suitable choice to play Nina Simone? 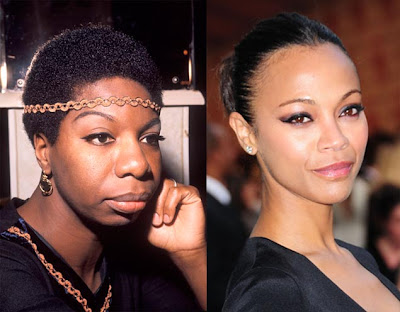 IN HER IMAGE: Simone (left) and Saldaña.
Controversy and colorism have hardly been mutually exclusive concepts in Hollywood, but especially in the case of biopics and other films about important Black figures and significant Black historical moments. It’s now commonplace that tug-o-wars will ensue over which actor is the suitable choice to portray this icon, which star possesses the requisite capacity to make the work of that legend feel authentic onscreen and equally important it seems who has got the right ‘look.’

At least two upcoming Black films are mired in controversy over colorism. First, there is deafening backlash in the wake of news that Hispanic actress Zoë Saldaña (Avatar, Colombiana) has been tapped to portray blues legend Nina Simone in an (unauthorized) romantic telling of the late singer’s life. Many of the objectors, including Simone’s daughter Simone Kelly, feel the actress, though talented, doesn’t fulfil the “look” requirement. In other words, Saldana doesn’t even remotely resemble Nina Simone so she shouldn’t be cast to play her.

British-born actress Thandie Newton is also the subject of dissenting talk as people feel she is too ‘fair-skinned’ for the part assigned her in the upcoming film version of Chimamanda Ngozie Adichie’s Half of a Yellow Sun, set at the height of the 1967 Nigerian Civil War.

And, as an added bonus, who can forget the hoopla over the announcement last year that Angelina Jolie would be stepping into Elizabeth Taylor territory as the next Cleopatra. Why wasn’t a ‘Black’ actress offered the role?, people ask.

In any case, as a longtime admirer of her music and fearless warrior spirit, I feel most strongly about this upcoming Nina Simone film. For me, a Zoë Saldaña is not who springs to mind – not even as a longshot – when I think of the legendary singer of such classics as "Young, Gifted and Black" and "Strange Fruit" being immortalized on the big screen. Even singer Mary J. Blige (though quite a stretch) seems a more suitable option in terms of possessing a physicality and strong facial features similar to Simone’s. Turns out, Blige was in fact offered the part but later had to drop the project due to scheduling conflicts.

An online petition at Change.org calls for Cynthia Mort, the writer and director of the film, and Jimmy Iovine, executive producer, to “replace Zoë Saldaña with an actress who actually looks like Nina Simone.” The petition had gathered more than 2,100 supporters as of Wednesday morning.

According to Mort, who is white, the film was not intended to be a biography in the strict sense, but instead “a love story about an artist’s journey unto herself.”

“My mother was raised at a time when she was told her nose was too wide, her skin was too dark,” Simone’s daughter has said. “Appearance-wise this is not the best choice,” she added, referring to Saldaña. Though admittedly a fan of Saldaña’s work, Kelly said she would have preferred to see an actress like Viola Davis or Kimberly Elise in the role. Her mother’s own choice to play her, she noted, was Whoopi Goldberg.

Email ThisBlogThis!Share to TwitterShare to FacebookShare to Pinterest
Labels: Commentary, Critic's Notebook, Do I Smell a Controversy?, Talking Films