EYE ON THE PRIZE: From Kingston to London, Byfield is on a serious winning streak 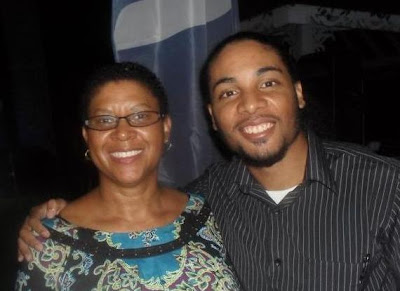 ART & SOUL: Byfield, with Flow's Jeannette Lewis at the 2012 Reggae Film Fest.
When first-time filmmaker Christopher Byfield set out to make his ambitious short feature Red Amber Green, about homeless boys making life on the mean streets of Kingston, he wasn’t sure of how it would be received by a notoriously hard-to-please public.

These days, whatever worry he might have had are long gone with the wind, thanks in large part to a slew of awards (including Best Short Feature at this year’s Reggae Film Festival) and critical huzzahs from Kingston to London where, as it happens, the film (funny, intense, well-acted) was among the offerings at the Portobello Film Festival on August 31.

Byfield wasn’t in attendance, but word of the film’s wonderful reception found its way back to him. “It went well,” he tells me, calling by telephone. “[The organizers] sent me a message that it was well-received and the audience loved it.”

It’s highly unlikely that the response will be any different when it graces the upcoming Trinidad and Tobago Film Festival, Sep. 21 to Oct. 2, where Amber will be shown as an official selection. “This is the big one which will be attended by all the top filmmakers from across the region,” Byfield says quite animatedly.

If the logistics pan out, he will be flying to Trinidad to present the film. “I had a talk with Kim [Spence] at the film commission to see how best things can be worked out for me to attend. So I hope everything will work out.”

As he keeps his fingers crossed on that account, he is quietly plotting his next act, a hush-hush film project set to debut later this year. Stay tuned.