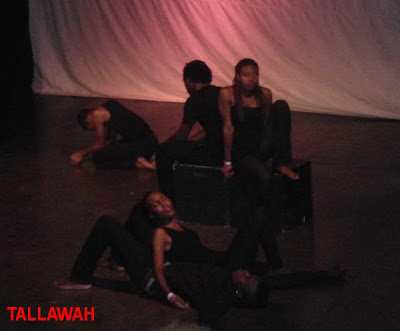 BACK TO BLACK: Members of Tableaux take centrestage.
In addition to the live music and the film screenings, one of the highlights of Saturday’s Gungo Walk Festival in Kingston was the inspired pairing of the youthful and fast-rising performing arts ensembles – Quilt and Tableaux – for a hugely enjoyable evening session dubbed “2 The Hard Way” inside the EMC’s Dennis Scott Theatre.

I’d first encountered both these groups when they were making their initial dent in the cultural consciousness with award-winning presentations in the Tallawah tertiary drama competition on the Mona campus in 2010 and 2011. Since then I’ve witnessed their continuing metamorphosis into cultural voices of note, offering small-scale productions with big-hearted messages that not only delight their audiences but also question authority and provoke thought.

Take Saturday’s offerings, for instance. Rendering excerpts from their 2012 show I Have a Dream, Tableaux served up a wonderfully sly mélange of social commentary, humour and gravitas as they explored everything from poverty and politics to attitudes toward hair and even homosexuality. A super-flamboyant male “salon” owner stole the spotlight. 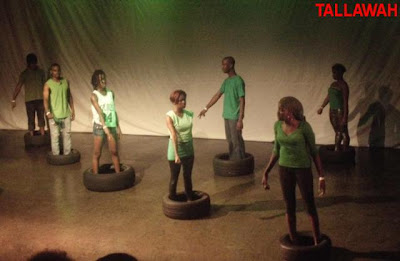 Both troupes made ample use of space, lighting and movement in conveying their sharp stories and sturdy messages, but Quilt took a far grittier route in presenting 73, their deliriously arresting 30-minute opus which dominated the 2011 awards at Tallawah. Examining the unforgettably tragic Tivoli Gardens incursion of 2010, Quilt’s minimalist production has lost none of its captivating power or brutal honesty. To say the least, Saturday’s audience was absolutely engrossed.

If nothing else, 73 serves to reinforce my firm belief that with such bright, deep-thinking and enterprising groups as the Rayon McLean-led Quilt and, of course, Tableaux, theatre’s future generation is already hard at work.