NOW AND THEN: Winkler reimagines a storied slice of history in latest book 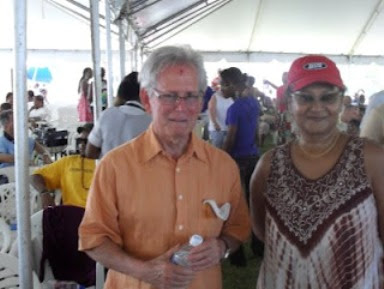 THE WRITE STUFF: Winkler, with Annie Paul at Calabash 2009, in Treasure Beach.
With a body of work that includes such highly-regarded novels as The Lunatic and The Painted Canoe, Jamaica’s Anthony Winkler has established himself as a master storyteller possessed of a distinctively West Indian voice and a taste for sly humour and the subtly subversive. This month, however, sees the publication of his first historical novel, God Carlos (Akashic Books), which offers a fresh spin on the seminal Amerindian-Spaniard dynamic. In a rare and exclusive interview, the Atlanta-based Winkler opens up to TALLAWAH readers about creative imagination, the advancing years, and being eternally devoted to his homeland.

TALLAWAH: Why was it important for you to pen this historical novel, and what was the process of putting it together like?
Anthony Winkler: To paraphrase Agatha Christie, ‘One writes what one can, not what one can’t.’ Something similar may be said in answer to your question. I wouldn’t have written God Carlos if I didn’t think the subject important. It takes a substantial investment in time and effort to write a novel, whether one rooted in history or entirely in the imagination, so you better be prepared to take on a long-range task. Writing God Carlos turned out to be a rather straightforward project. The book required a lot of specific details obtainable only in libraries. Digging through archival sources is second nature to me and labour I actually like, so I found the work right up my alley.

TALLAWAH: What do you hope readers take away from the experience of reading it?
Winkler: I hope it gives the open-minded reader a glimpse into the mentality of both the Arawak Indian and the Spanish conquistador. In the narration, I tried to construct reality as each side must have seen it. What I found is that both the European and the Indian occupied worlds that were simultaneously identical yet utterly different. Both believed in a God who ruled over everything. Aside from the details and the different names given to the objects of their worship, a remarkable similarity existed in the pantheon of both cultures. It also occurred to me that there were two kinds of spaces at issue between the two peoples. Physical space is measurable, cultural space is not. Where the Indians lived was in an interior dimension defined by faith and culture, not by the tape measure. Likewise, the Spanish carried within them a conception of the Spanish God whose being would have been incomprehensible to the Arawaks. Inevitably this vast difference would’ve ended up in a state of war. 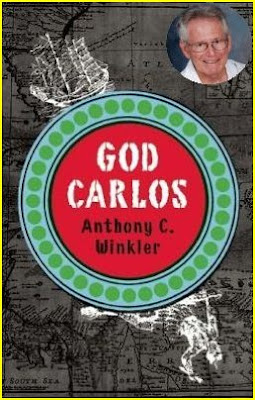 TALLAWAH: Of all your novels and short stories, which one(s) do you revisit the most?
Winkler: I almost never back over my work. Once a book is done, it is done and I never go trailing after it. On the other hand, I backlog work sometimes for years and will occasionally revisit an incomplete manuscript out of curiosity.

TALLAWAH: What subject or burning issue do you feel compelled to tackle in your next work?
Winkler: I have at least two other projects that I occasionally turn over in my mind. But I haven’t done anything with them for years. Part of the delay is due to the fact that I’m an old man now, having just turned 70, and in so-so health. [Winkler suffers from Parkinson’s disease.]

TALLAWAH: Finally, what are your thoughts on modern-day Jamaica as an island-nation marking 50 years of political independence?
Winkler: Jamaica is my birthright, my lover, my mother, the genius locum of my heart and soul, and the one place on planet Earth against whom I will never raise my hand. Walk good, my lovely.