SHERYL LEE RALPH: The original diva on her roots, success, and Jamaican men 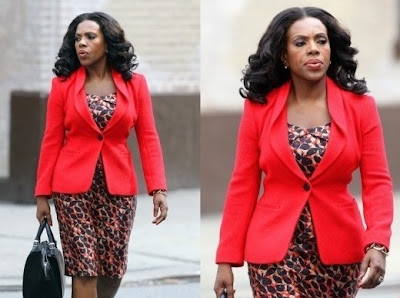 RED HOT: Ralph on the set of Smash's season 2, airing on NBC in January.

Acclaimed and well-loved Jamerican thespian Sheryl Lee Ralph, currently in the island as a guest of Sagicor, recently sat down with Profile’s Ian Boyne to bring local viewers up to speed on her life at this point. Whether dishing on her showbiz career, reminiscing about growing up as an island girl, or referring to her new book, Redefining Diva, Ralph was a delightful, warm and engaging presence, making for a thoroughly involving interview that ended all too quickly. Below, some highlights:

On how her Jamaican roots keep her grounded in Hollywood:
“I remember dancing for the Queen at Jamaica’s Independence celebrations 50 years ago, in 1962. It was a small group of kids from Mandeville, and I was a part of that group, and we did that little dance for the queen, although we were probably just a speck in her eye. We did “Dis Long Time Gal Mi Never See You.” And I’ll never forget those sorts of things. I did my first television commercial in Jamaica. So [in Hollywood] when things would be presented to me, I was always seeing Jamaica. I was always seeing my family. And I wanted them to be proud of me.”

On the secret to her success and her approach to her craft:
“I come to work prepared. I come ready. In fact, people who follow me on Twitter know that there’s a saying I have that goes, “If you stay ready, you don’t have to get ready.” So I like to stay ready, because one just never knows. And I continue to walk in faith, because things may not have happened at the time and in the way that I would have liked them, but [they happened] in the way that God ordered my steps. So I must continue to be faithful, walking and knowing that my better days are ahead of me. When you are optimistic, you look good. You wear it. People can’t help but see it.”

On working with Jennifer Hudson for Smash’s upcoming second season:
“She is the sweetest girl; she couldn’t have been nicer. She looked at me and she said, ‘Miss Ralph, I want to be you. If I can have that, that’s what I want.’” The last day of the shoot she sent me flowers that were THIS BIG. Literally. And they must have weighed at least 25 pounds. I love that girl. I’ve got the most incredible showbiz kids, from Lauryn Hill in Sister Act II to Brandy on Moesha and now Jenifer Hudson on Smash. Three of my daughters.”

On what we can all take away from that infamous Robert Mugabe statement about Jamaican men:
“It goes back to the image. What is the image that has been exported? What is the image that has been seen? He doesn’t know about our well-educated, brilliant leaders and prime ministers. He doesn’t know that. All he knows is the ganja-smoking artistes that he might have to lock up for a day or two that come to visit his country. That’s what becomes “the Jamaican man,” when we all know that we have Jamaican fathers and brothers who get up everyday and do right by their families. Not to say that there aren’t a few who spend too much time in the rum bar, but if we could find more of them in the university it would help offset what’s happening... We’ve got to look at ourselves. We’ve got to look at what we made okay for other people to see.”