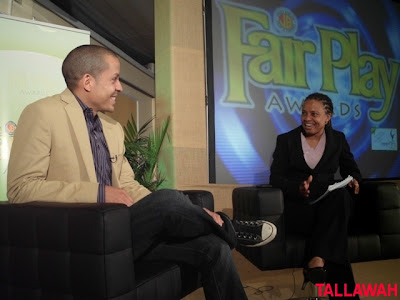 TECH TALK: Rodgers-King (left) with Jackson-Miller.
In acknowledgement of just how deeply – and inevitably – social media has insinuated itself into the lives of journalists everywhere, a brisk and informative convo-discussion played out at Tuesday’s Fair Play Awards at the Terra Nova Hotel in Kingston.

Dubbed “Social Media: Redefining Journalism in the Digital Age,” the session was expertly moderated by Dionne Jackson-Miller who rapped for 25 minutes with Saadiq Rodgers-King, the Jamaican-born, US-based co-founder of Hot Potato, an increasingly popular mobile application, which was recently scooped up by the bigwigs at Facebook.

Addressing the ever-growing dominance of social media (quick, interactive Twitter and Facebook) in the face of the more sluggish modes of traditional journalism, Rodgers-King’s message was simple and rang out lucidly: today’s media entities will have to either evolve with the times or get left behind. “You have to put in the work to make your output more interesting for your consumers. Times are changing,” he noted. “It is up to journalists to maintain that sincere interaction with their readers.”

Among the long-term benefits to be derived is greater efficiency, he further explained. “You need to be where the majority of today’s media consumers are, online and mobile,” he emphasized – even as he stressed that there’s more to it than easy profitability. “If you are lucky enough to enjoy what you do,” he says, “it makes the task that much more tolerable.”