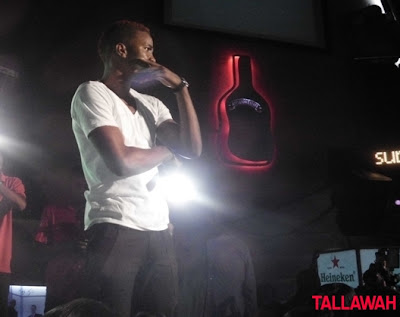 Top-flight deejay Konshens is fast becoming one of my favourite live performers, joining the ranks of Kanye West, Beyoncé, J-Hud, and of course, MJ. To be perfectly honest, that’s an incredible feat in and of itself because giving a live performance is not just about rendering your big hits to the audience’s delight; it’s about delivering a high entertainment value steeped in compelling stagecraft and keeping it real.

As TALLAWAH readers are fully aware by now, the 27-year-old deejay is all about keeping it real – which can sometimes attract controversy. But ninety percent of the time, his lyrical and emotional authenticity makes his audience appreciate him that much more. Hence his burgeoning success locally and abroad. And speaking of success, the deejay’s “Behind the Screen” concert held last Tuesday night inside Usain Bolt’s Tracks & Records was all that and more.

The crowd that he drew to the Marketplace venue was so humongous that dozens had to enjoy the show from the outside. Meantime, the early birds and those fortunate enough to be part of the standing-room only audience got value for their hard-earned dollars. The performance Konshens gave was not only laced with lyrical brilliance but also a fun sense of improv and forging a real connection with those standing before him, predominantly screaming females aged 21-35.

By the time I arrived at Tracks & Records, the deejay was already in the midst of “Winner,” after which he segued into the heartfelt “She’s Happy” and the provocative “Gunshot Ah Fire.” Fan favourites like “Gal A Bubble” and “Stop Sign” were met with deafening screams, which only intensified when the deejay removed his shirt to reveal a white merino. “Take it off!” a woman in the back shouted. “You take yours off,” Konshens responded to a round of laughter. It’s that sort of easy give-and-take that continues to endear him, I think, to followers while widening his loyal fanbase. 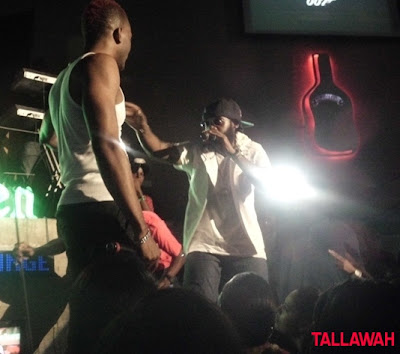 New tune “No Hesitation” mixed with Marvin Gaye’s “Sexual Healing” quickly followed, and “Give It to Dem Different” featured a crowd-pleasing demonstration with a young lady plucked from the front row. But the night was just getting started, as Tarrus Riley (“Good Girl Gone Bad”) and Delus (“What Tomorrow May Bring”) and Darrio (“Gal Sidung”) would later appear to help their brother raise the roof before the show closed with an abbreviated take on “Do Sumn.”

“The performance was good,” Konshens told me after the show. “The band played well, and the artistes that pass through came and delivered well, and the fans were pleased. And that is the point of the whole thing.” The ace deejay, who is up for a MOBO Award in November, also addressed the recent spate of criticism over the adult-only “Clap Dat” video he did with Leftside. “That is something that I overlook,” he explains. “That is more important to the outside than to me. Mi nuh really business. Mi ah express myself, and anything that I express I stand behind it.”

And he plans to end 2012 in trademark fashion. “Just more music,” he says. “Just as how I started this year, I plan to just constantly be doing music.”