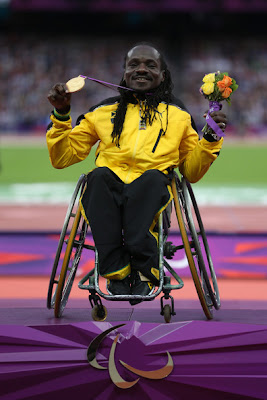 NATIONAL PRIDE: Cunningham at the medal presentation.
Golden days are here again, thanks to our ever-inspiring Paralympics contingent across the pond in London. Prime Minister Portia Simpson-Miller says national Paralympic athlete Alphanso Cunningham, who landed Jamaica's first gold medal at the Games on Tuesday, is a role model for us all. Her remarks come shortly after Cunningham threw 21.84 metres in the Javelin F52/53 on Tuesday morning. Cunningham’s achievement is not only a national record but also a record for the entire North and South American regions.

“We are such a blessed people,” says Simpson-Miller. “Our excellence in sport extends beyond our size but not beyond our ability and our will. Alphanso is indeed a role model for so many. He has consistently shown that disability is not an obstacle to success.”

Adds Simpson-Miller, “Today’s gold medal gives us further cause to celebrate and be proud of our great country.”

Simpson-Miller, who also commended Cunningham’s coach and the entire Paralympics team, was Jamaica’s sports minister back in 2004 when Cunningham earned gold in the discus at the Paralympics in Athens, Greece. 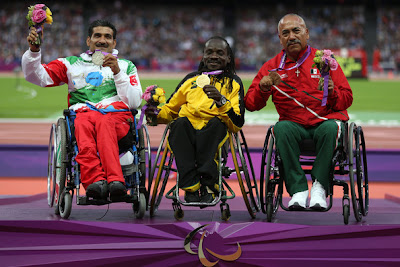