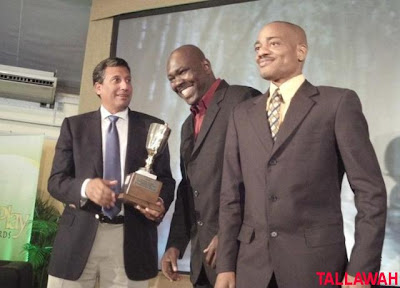 BORN TO WIN: Wright and Shaw being presented with a trophy by Jamaica Broilers' Christopher Levy.
After an insightful and fast-paced social-media discussion at Tuesday’s 12th renewal of the Fair Play Awards, it was time for the main event: the announcement of winners of this year’s awards, which attracted a total of 23 entries (17 from TV, 6 in print).

For his morbidly fascinating “Death Postponed” series, The Observer’s HG Helps took first-place honours in the print category, while, for the second year in a row, TV J captured the television category, thanks to reporter Kirk Wright and videographer Ivan Shaw’s eye-opening and life-saving report “Working in Danger: Asbestos Alert.” Winners were presented with trophies and a cheque valued at $150,000.

Meantime, The Gleaner’s Tyrone Reid walked away with two merit awards for his investigative pieces “This Is Madness: The Bellevue Story” and “An Unhealthy State of Affairs.” Reid took home a certificate and $50,000. TV J’s Earl Moxam also earned a merit award. “Hard work and fairness do pay off,” Wright said on behalf of the awardees following the luncheon.

“Taken together, these are impressive entries and make for a revealing portrait of Jamaica fit to be distributed abroad,” remarked chief judge Hopeton Dunn. He noted, too, that this year’s submitted entries (a mix of investigative probes, human interest features and gripping exposés on health and education) demonstrated a commitment to media excellence and selfless devotion to high standards that remain hallmarks of first-rate journalism.

Presented annually under the auspices of the Jamaica Broilers Group, the Fair Play Awards (now in its 12th year) was first launched to encourage journalists to give of their best to their profession.