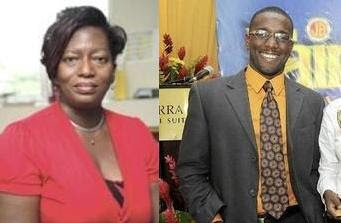 AT YOUR SERVICE: Campbell (left) and Gordon.
The Gleaner’s Managing Editor Jenni Campbell was on Sunday returned unopposed for a second term as President of the Press Association of Jamaica (PAJ). Campbell will be joined on the executive by returning members Milton Walker, Arthur Hall, Ceila Morgan and Rohan Powell. The new exec members are first Vice-president Archibald Gordon (RJR Group) and Secretary Ingrid Brown (the Observer). The Gleaner’s Audley Boyd and attorney-at-law and media practitioner Helene Coley-Nicholson have both been appointed directors. The new executive will serve for two years.

“We stand firmly and will continue to do so, in defence against any threat made against journalists to practise their trade without favour or interference,” Campbell remarked in her acceptance speech. “The financial welfare of our members is also critical to their ability to function effectively in their quest to preserve this democracy, and the PAJ must take time to examine what can be done in this regard.”

Campbell noted, too, that the AGM has mandated the new executive to clearly articulate to the public that the PAJ has done all that it can to establish a Press Complaints Council to address concerns from members of the public. The PAJ has put in place a Code of Ethics to which its membership subscribes, but the process towards a Press Complaints Council has been stymied by the decision of the Media Association of Jamaica not to support the move.

“The PAJ cannot establish this body without the full support of media owners and operators,” noted Campbell, “and the AGM has instructed that it should be made clear that we are not opposed to the establishment of a body to hear complaints from the public, but that needs the support of the media owners.”