TIME OUT: Olympic star Warren Weir on his top music picks and life off the track 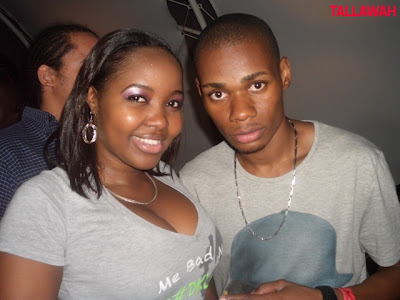 DUET: Weir poses with Khadyn Ridley at the Konshens concert.

"Locally, I have to big up Tommy Lee, who is a very good artiste running the place right now,” offers track star Warren Weir, referring to his top pick for the hottest Jamaican entertainer of the moment. “Popcaan is still holding it down, too, and several cultural artistes. Internationally, I have to give ratings to Drake and the whole MMG crew, who I enjoy listening to.”

The Olympic bronze medallist (one-third of Jamaica’s history-making 1-2-3 Men’s 200m team in London) and avid dancehall supporter was on the scene last Tuesday night at Tracks & Records for Konshens’ “Behind the Screen” concert, where he spoke to TALLAWAH about his taste in music and how he spends his time off the track.

Warren, who turns 23 next month, says his downtime allows him to indulge his favourite pastimes. “I play football with my friends, play some video games, go out and get some food to eat, and practically that.” With training for next year’s athletic season set to commence within a few weeks, the Racers athlete says he’s making the most of the leisure time he now has at his disposal. “The off-season is not a very long one so, yeah man, you have to enjoy it while it lasts.”