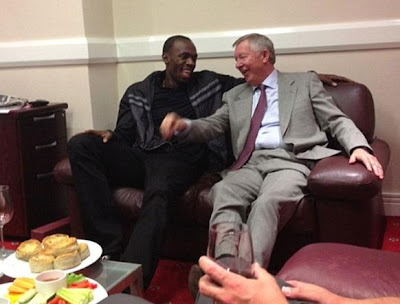 MAKING MERRY: Bolt and Sir Alex share a laugh at a recent get-together.
The World’s Fastest Man has never shied away from voicing his desire to lace up for his all-time fave soccer squad, Manchester United. He was even a guest at a recent United's EPL home game against Fulham and went on the pitch to show off his Olympic gold medals to the crowd. Now club manager Sir Alex Ferguson has hinted that Bolt could indeed turn out for the club.

“He's a bit of a character and a big United fan. But it's interesting he says he'd like to play in a charity game," Ferguson was quoted on the club’s official website. “It could be brilliant and next year, when we play Real Madrid's Legends again, there could be opportunities to bring him up and see how he does.”

In other Bolt news, in the wake of his heroic exploits in London, the superstar sprinter has now amassed over 2 million (and counting) followers on Twitter. His official Facebook page has since attracted well over 8 million fans.