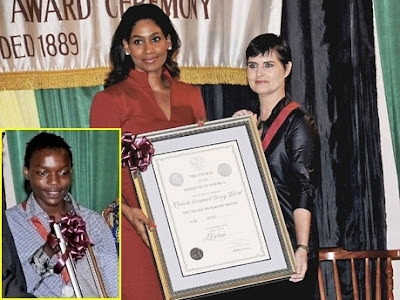 This past Monday, the 2012 Musgrave Medals were handed out at the Institute of Jamaica, Downtown Kingston, where 14-year-old Richaydo Farquharson was presented with a youth medal for his exploits as a budding entrepreneur. (He operates 14 bee colonies in Porus, Manchester.)

The bronze-medal awardees were Dr. Ellen Campbell-Grizzle for her work in the sciences, Arlene Patricia Ononaiwu for library development, Ebony Patterson for the arts, Dr. Donald Shirley for music, and the Poetry Society of Jamaica for its work in the field of literature.

>> CULTURE SPOTLIGHT:
The National Arena in Kingston will come alive with the sound of music on Heroes’ Day (next Monday) as an impressive lineup of local-based entertainers will pay tribute to our 2012 Olympic and Paralympic athletes at a concert, kicking off at 7:00 pm. Among the performers: Beenie Man, Chris Martin and Konshens.