FILM OF THE WEEK: Richly suspenseful Argo reawakens a piece of the past 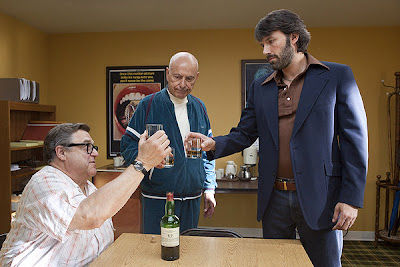 MEN ON A MISSION: Affleck (right), Goodman and Arkin.

If one needs a truly reliable indicator as to the lengths the US government will go to protect its own abroad, you need look no further than Argo, Ben Affleck’s engrossing-intriguing chronicle of the life-or-death covert operation to rescue six Americans, which unfolded behind the scenes of the Iran hostage crisis. It’s a vivid, compelling piece of storied history come to life and a filmmaking tour-de-force.

On November 4, 1979, as the Iranian Revolution reached its boiling point, militants stormed the Tehran-based American embassy, taking some 50 Americans hostages. Amidst the chaos, six of the Americans manage to slip away and take refuge in the home of the Canadian ambassador. Knowing it is only a matter of time before the escapees are discovered and likely killed, a CIA specialist named Tony Mendez (a terrific Affleck, pulling double duty) devises a risky plan to get them safely out of the country.

Incredibly, with the assistance of key players (John Goodman, Alan Arkin and Bryan Cranston in sizeable supporting roles) it is decided that Mendez will fly to Iran, where he will meet up with the six, and together they’ll pretend to be a film crew scouting the Iranian landscape for possible shooting locations for their "movie." It’s a fascinating premise for a film, made all the more astonishing by the fact that such circumstances actually happened.

Proving yet again that he could have a fulfilling career behind the camera, Affleck manages to take this unfortunate piece of the past and elevate it into a parable for prevailing against unimaginable odds. Overall, Argo is simply an excellent film, full of suspense, rich with intensity and crackling with dark humour. Having now seen three films directed by Affleck, I can only say he’s forging quite a reputation in Hollywood as a sharp-eyed auteur, with a knack for painstaking attention to detail and eliciting compelling performances from his actors – Oscar nominees Amy Ryan in 2007’s Gone Baby Gone and Jeremy Renner in The Town (2010) leap readily to mind.

In short, what Argo seems to represent for many awards-season watchers (yours truly included) is the first real Best Picture contender of 2012. It’s both supremely worthy and surpasses expectations. Tyrone’s Verdict: A-