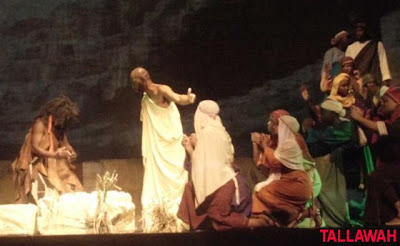 EVERY KNEE SHALL BOW: Williams (as Jesus) and Carlos Henry (as John the Baptist) with villagers.

While the show’s strengths are undeniable – for one, the ambitious grandeur with which the production is staged truly pulls you into the story – one finds that the musical glosses over key moments in Christ’s early-to-mid life as it speeds towards its sensational conclusion, highlighted by the betrayal, crucifixion, and resurrection.

Still, you can’t deny that in the expert hands of HoLung (who penned the book and lyrics) and his committed crew, including deft director Greg Thames and lighting/special effects maestro Robin Baston, in the end the show comes off as a finely-tuned interpretation of Biblical events.

At its best, The Messiah! (divided into two lengthy acts) pulses with relentless energy and the remarkable optimism typical of HoLung mega-musicals. As for the tunes, more often than not they are simply irresistible, combining the lyrical thrill of showbiz pop with the essence of reggae and an enthralling blend of voices. “The Temptations of Christ,” “The Demons” and “Lift Your Hearts” are standout numbers that readily leap to mind. 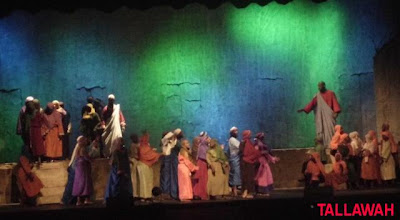 Leading an enormous supporting cast of 50-plus actors, singers and dancers, Wynton Williams offers a wonderfully charismatic performance in the title role. Pulling double duty as the show’s musical director/arranger, Williams’ portrayal of the Son of Man, while full of authority, also manages to convey a sense of nuance, sensitivity, and profound conviction. Whether driving heathens from the temple, casting demons from a teenaged boy, or facing off against the Devil in one of the production’s most operatic scenes, the actor is a study in power and passion.

And, for me, the same could be said of the overall production, which boasts emotional depth, beautiful lighting, haunting music and a powerful protagonist armed with a timeless message of humanity and hope. One of the year's best productions. Tyrone’s Verdict: A-