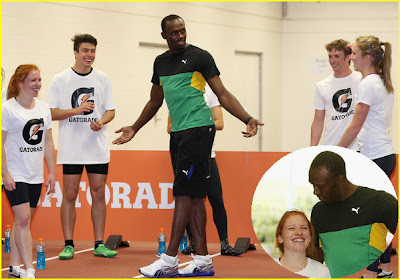 A DAY IN THE LIFE: Bolt conducts a training clinic in New Zealand.

As expected, given the phenomenal year he’s had, sprint king Usain Bolt is highly fancied to walk away with the 2012 IAAF Male Athlete of the Year award when the trophies are handed out next month during a glitzy ceremony in Barcelona, Spain.

While compatriot Yohan Blake is also among the male nominees, Shelly-Ann “Pocket Rocket” Fraser-Pryce is the lone Caribbean nominee among the women. “Real honour to be nominated again for IAAF Athlete of the year. Congrats to all the other nominees,” Bolt tweeted to his fans.

In the meantime, Bolt’s fun-filled Aussie Adventure came to an end this week as the ace sprinter hopped over to neighbouring New Zealand, where he was given a rousing welcome and a crash course in Kiwi and Maori culture. “Just say New Zealand define what new experience is about. #new culture,” he tweeted. Up next: Say Konichiwa, Japan!! 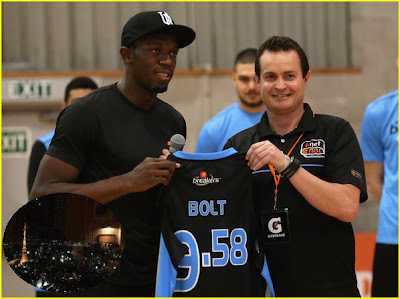 THE RIGHT SIZE: Being presented with a basketball jersey by Richard Clarke of the NZ Breakers. Inset, the view from Bolt's hotel in Japan.

Posted by TALLAWAH Magazine (tallawahmagazine@gmail.com) at 1:36 am