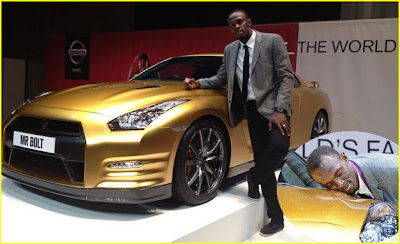 SOLID GOLD:  Bolt poses next to his sleek new Nissan GT-R in Japan.

The World’s Fastest Man keeps racking up the frequent flier miles – and the accolades. Fresh from his sojourns in Australia, New Zealand and this week in Japan, the sprint king has jetted off to the Empire State (New York, for the uninitiated), where he is kicking it with CNN’s Piers Morgan, host of the widely regarded Piers Morgan Tonight interview programme… Bolt, who copped his umpteenth nomination for IAAF Male Athlete of the Year recently, has been ranked at #2 (behind Agent 007) on Ask.Men’s prestigious list of the 49 most outstanding men in the world in 2012. Call it the Year of Bolt.

Meantime, auto giants Nissan announced a partnership in June with the Olympic legend and the relationship is already blossoming as Bolt has been named Nissan’s honorary Director of Excitement. And Bolt is spreading the love as a unique and super-sleek Nissan GT-R, embossed with the champ’s signature will be auctioned on eBay later this month to benefit the Usain Bolt Foundation. 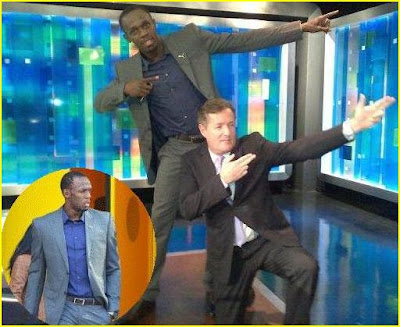 SET IT OFF: Doing the pose at Friday's taping of Piers Morgan Tonight. Inset, Bolt outside his New York hotel.