ON THE RECORD: Richie Spice riffs on his latest release, singing from the heart, and respect 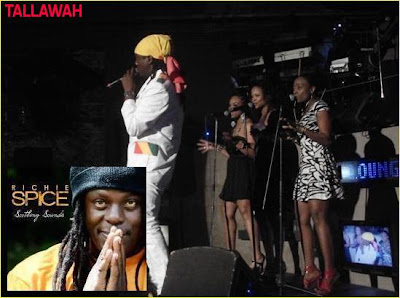 IN THE GROOVE: In concert at Behind The Screen; Inset, album cover.

Reggae icon Richie Spice was destined to put out an all-acoustic album; musically, the man’s soulfulness echoes at all the right moments. As such, his new CD, the aptly titled Soothing Sounds, is a bonafide collector’s item.

The modest but supremely appreciative audience that turned up at Marketplace for his “Behind the Screen” concert and album launch on Tuesday got a solid sample of the album’s balmy reggae-soul-jazz offerings. Following the hour-long performance, the crooner rapped briefly with TALLAWAH:

Celebrating the release of new acoustic album, Soothing Sounds:
“We feel nice and we feel great because we’ve made a great accomplishment to the fullest with this album. We give thanks to know that the album has been released and being distributed by Tad’s Records. You can get it on iTunes and from record stores, and so I’m glad that people can get it wherever they want it.”

Channelling deep soulfulness in his music:
“The soul is within, you know. Me, myself is soul and whenever I sing, I sing from the heart, so that’s how you make sure the music connects.”

Touring again:
“We’re just getting some things together ‘cause we’re going back on the road soon to promote this album. And we had this concert to do from last week but through Hurricane Sandy it had to be put off to this time. So we’re just getting ourselves ready promotion-wise.”

Outlook for the future:
“What we want to accomplish is to see people start to respect each other more and start to love the youths and look out for the youths more.”