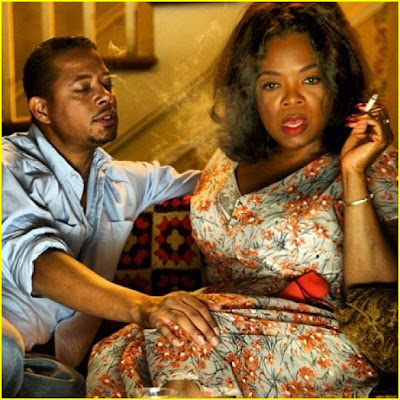 Oprah Winfrey looks positively hot and bothered as she films a smoky love scene with Terrence Howard for The Butler, coming to the big screen in 2013.

Miss O knows a juicy role when she reads one, hence she the media titan (and part-time actress) eagerly signed on to play Forest Whitaker’s wife in the picture, the latest directorial effort by Lee Daniels (Precious). Based on a series of articles written by Wil Haygood, the epic drama follows Eugene Allen (Whitaker), a butler in the White House who worked for eight presidents over the course of more than 34 years, including during the age of racial segregation.

Winfrey co-stars as Gloria Gaines, his woman who ages from 22 to 90 years old throughout the movie. Howard is cast as, well, the lustful Howard. Adapted for the screen by Daniels, the film boasts a star-studded supporting cast: David Oyelowo as Louis Gaines; John Cusack as Nixon; Liev Schreiber as Lyndon B. Johnson; Alan Rickman as Ronald Reagan; James Marsden as JFK; Cuba Gooding Jr. as Carter Wilson; Jane Fonda as Nancy Reagan; Melissa Leo as Mamie Eisenhower; and Robin Williams as Dwight Eisenhower.

Shooting is now underway down in New Orleans, and the film is slated to hit cinemas sometime in late 2013.