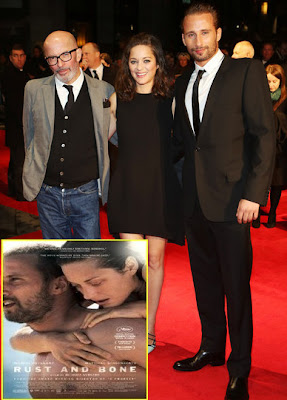 Rust and Bone was the big winner at the recent British Film Institute Awards in London, meaning Marion Cotillard has a good shot at garnering a second nod for a Best Actress Oscar. As we head into the thick of awards season, every little accolade matters in the race for Oscar contention, which is why prognosticators are singling out Rust and Bone as a movie to keep your eye on.

The film, directed by French filmmaker Jacques Audiard stars Marion Cotillard (La Vie En Rose) as a woman who suffers a tragic accident and rebuilds her life and soul with the help of a street-fighting single father. Beating out 12 other heavily lauded pictures, it copped the British Film Institute's top prize at the BFI Film Fest in London on Oct. 21.

Also garnering early buzz, Benh Zeitlin's Beasts of the Southern Wild was the other notable winner at BFI, walking away with the Sutherland Award for best first feature.