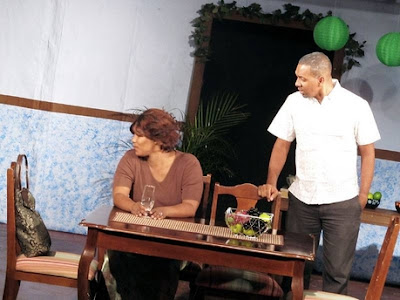 TROUBLE IN PARADISE: Harris and Ainsley Whyte both won huzzahs for their portrayals.

According to DMH Productions’ head writer Dahlia Harris, the eagerly awaited sequel will not only continue to unfold the intriguing tale we witnessed in the first instalment but also explore issues relating to marriage, infidelity and forgiveness – with the focus primarily on Carlton, whose illegal activities and incarceration served as a catalyst for the action which unfolded in part one. After five years in prison, Carlton comes home to find his world turned upside down. As he hits the road to redemption, he must cope with a strained marriage, an illegal lifestyle exposed, and a standard of living way below his tastes.

“The early response has been overwhelming,” states a release from DMH. “Several groups were disappointed that they missed out on both the initial and second run of God’s Way, and if they wait much longer they will miss this opportunity as well.” Though tickets are limited, the producers are still offering special benefit packages to church groups, schools and other organizations to assist with their fundraising efforts. Info: 352-6180 or theatrejamaica09@yahoo.com.