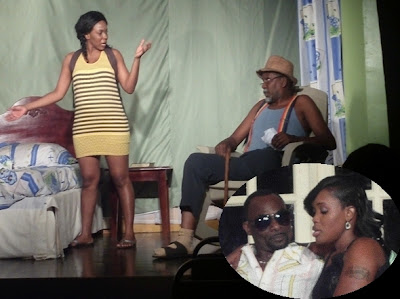 In Scandal, the latest comedic offering from Stages Productions, Garfield Reid portrays Stanley/Blue, a filthy-rich drug dealer and abusive husband who, 18 years after fleeing the country to escape the pressures of rural life and a young lady whom he allegedly knocked up, is now enjoying life in suburban St. Andrew in a sprawling, gorgeously decorated mansion, complete with expensive furnishings and Scarface and The Godfather posters – not to mention a mistrustful and frustrated wife (Belinda Reid) and a put-upon housekeeper (a comically savvy Abigail Grant).

When his past finally catches up with him, Stanley must not only face the proverbial music and a mean courtroom judge but also confront a slew of new and unexpected revelations that could floor even the most hardened criminal.

In a nutshell, Scandal, which marks the directorial debut of Keith ‘Shebada’ Ramsey (sharing credit with Bunny Allen), is essentially low-brow entertainment that readily favours laugh-a-line humour over sustained logic and substance. But I’d be lying if I said the show doesn’t boast some ridiculously funny moments once it really gets going, managing to hold up a mirror to basic human nature and the essence of being Jamaican to your very core.

Although what Stages Productions annually offers consistently wrings big laughs from audiences seeking catharsis, it would unequivocally signal a refreshing upgrade were they to start challenging patrons with more thought-provoking fare. After all, artistic evolution is key. Tyrone’s Verdict: B-